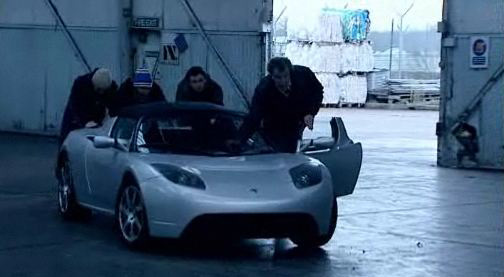 Top Gear fans? Remember the episode from a few years back where the crew tried to flog the Tesla Roadster? Yeah, it didn’t end so well for the Tesla after Clarkson started off praising the little electric supercar. The entire segment is embedded for your viewing enjoyment after the jump, but the skinny is that the Top Gear testers sort of died prematurely — a few times.

The first car’s battery’s ran out only after 55 miles. Then another car’s motor overheated. When they went back to the original car, something was up with the brakes. So yeah, one of the most watched TV programs in the entire world didn’t exactly portray the Tesla Roadster favorably. Enter the libel lawsuit.

Tesla’s VP of Communication Ricardo Reyes lays it out on the official Tesla blog. In short he says that back in 2008 when the episode ran, Tesla was a young start-up and “we were good sports.” But now Tesla is a serious contender with several high-profile investments and partnerships. Apparently they feel that they need to set the record straight hence the lawsuit.

Over the last several months, we have written to the BBC, asking them to stop repeating the serious and damaging lies on the show. Specifically:

Fact: The Roadster has been certified under UN ECE R101, the EU regulation for measuring electric vehicle range, at 211 miles. All ECE R101 tests are witnessed and certified by a neutral third party approved by the United Nations Economic Commission for Europe, in Tesla’s case, the Department of Road Transport – Netherlands. Of course, a car driven aggressively will get reduced mileage, regardless of whether its fueled by petrol or electricity, as Top Gear found. At the other end of the spectrum, through mindful driving, a Tesla owner achieved an astounding 313 miles on a single charge. To let either of these extremes represent real-world range is an incomplete analysis.

Fact: Neither Roadster ran out of charge during Top Gear’s tests, or even came close. We know because the Roadster records basic operating information. The show fails to mention that neither Roadster ever went below twenty-five percent charge. Why stage the stunt of pushing it into the hangar?

Fact: During Top Gear’s drive on the test track, the fuse for the braking system’s electric vacuum pump failed. But the brakes were operational and safe. The result was like driving a car without the convenient power brakes to which we’ve grown accustomed. Tesla’s brakes, both with and without the fuse, must pass all UN ECE safety tests, and they do.

Fact: At all times, there was at least one Roadster at the ready.

The blog posts states that Tesla is not “doing this for money” although it’s not exactly clear if that means the car company is not seeking financial reparations. Tesla claims they’re doing this because the episode they feel contains blatant lies has been re-broadcasted and is widely available. Unfortunately for Tesla, this lawsuit will likely not change anything. Google “Tesla Top Gear” and the top video hits are not from the BBC but rather user uploads. Clearing the Internet of all things Tesla Top Gear will involve a fair amount of takedown letters. Good luck with that.

Tesla’s claims were made public last night and the BBC has since released this statement. The best part? “The BBC stands by the programme and will be vigorously defending this claim.”
http://c.brightcove.com/services/viewer/federated_f8/1546306944