As a person who consumes dozens, if not hundreds, of articles on the web each and every day, it’s easy to remember that I’m an extreme outlier. Most people would prefer to read only a few articles a day — only the ones that they know are worth their time. That’s what Summify does in a nutshell. They survey the content on the web and condense it into the articles that will interest you the most.

Today marks the formal launch of Summify. After a few months in beta testing, they believe their social algorithms are ready for the world to try. And they also have a fresh round of funding to further spread the service.

Here’s how Summify works: it asks you to enter at least one account you use on the web to get information. This can mean Twitter, Facebook, or Google Reader. And if you can enter two or all three, even better. Summify then analyzes your social graph and the data flowing through it to see which stories it should serve up for you.

The default is to do this on a daily basis, but you can set it longer (weekly) or much shorter (every 6 hours). When the summary is returned, you’ll find a nicely laid out digest of the five or ten most important stories that you should read at that time. This includes which of your friends shared the story on Twitter and how many likes it got on Facebook.

It works very well. Each of the stories served up to me were the ones that I cared about (though it did miss a few major ones I would have also liked to read). But the best part is the end of the summary which reads “that’s it, you’re done!” How refreshing. 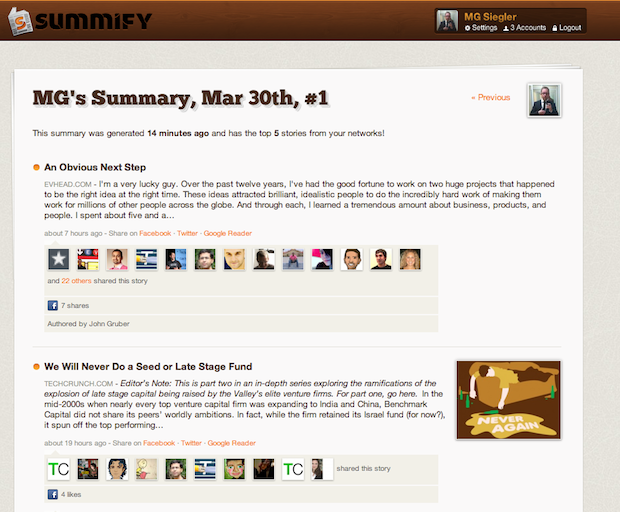 Techmeme, My6Sense, and even Google are trying different techniques when it comes to web curation, but Summify may have the most straightforward approach: these are the five to ten articles you should ready today.

These digests are served to you on the web and via email. And next quarter, there will be a mobile experience as well, we’re told.

“The nature of social media is such that even the most devoted users miss more than half of what comes at them, so we started with the idea that you can’t and shouldn’t read everything — read just the good stuff which is typically what your friends and sources are talking about the most,” is how co-founder Mircea Paşoi explains the service.

“Obviously, we had to put a lot effort in making sure it doesn’t become a popularity contest, and I think we’ve struck the right balance of highly relevant and diverse stories,” he continues.

To help with the cause, Summify has closed a new seed round of funding from Accel Partners, Rob Glaser, Stewart Butterfield, Steve Olechowski, and Canadian super angel Boris Wertz. The amount is undisclosed and follows a smaller round from August of last year.

The company is based on Vancouver, British Columbia. 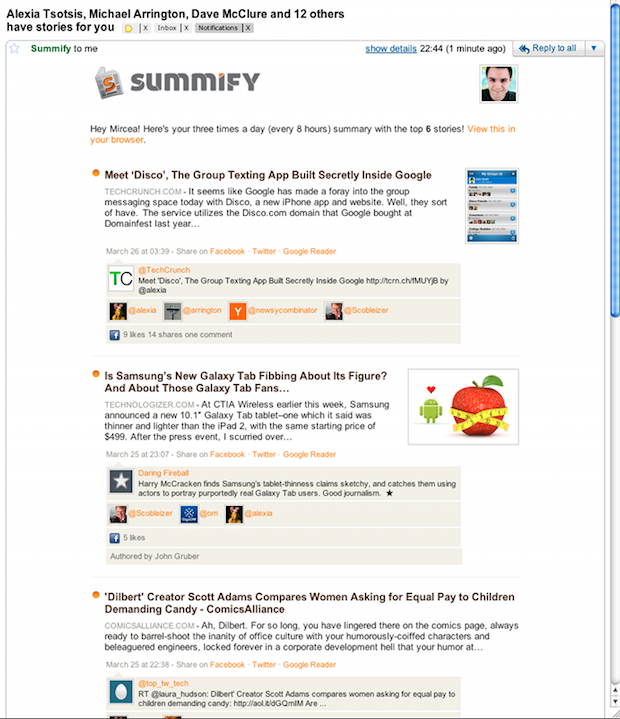