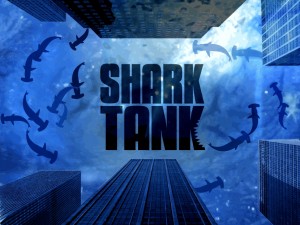 Just in case you missed it: Mark Cuban’s most recent investment took place in what is a fairly unusual setting for early-stage startup seed funding — a shark tank. That’s right, the controversial billionaire and media mogul was a recent guest shark on ABC reality show “Shark Tank”, in which 5 business moguls listen to entrepreneurs pitch their companies and decide whether or not to devour them like so many sardines. Great premise. (I’m also pretty sure ABC lifted the show’s name from Ron Conway’s boardroom, but I haven’t confirmed that yet.)

In the most recent Shark Tank-isode, co-founder and chief executive of Toygaroo, Nikki Pope, pitched her startup to the panel of honchos, hoping for big-time investment. Toygaroo, the self-labeled “Netflix for toys”, is an online toy rental service in which parents can sign up for and choose a “wish list” of toys that are then sent to their home, played with by their kids, before being returned to Toygaroo via a FedEx box. Before you start shuddering, the toys are, of course, cleaned and sanitized before being shipped.

Similar to Netflix, subscribers can sign up for one of six packages ranging from $24.99 to $52.99 per month, in which families receive a fixed number of toys every two months. Then you ship ’em back. Rinse and repeat. Users can also opt into a premium model that allows your offspring to receive toys every month rather than bimonthly.

Look out, Santa, Toygaroo is trying to put you out of business. And Mark Cuban is helping.

The success of Netflix must have been a factor for both Cuban as well as Canadian entrepreneur/mogul Kevin O’Leary, who beat out the other 3 sharks to buy a combined 35 percent of Toygaroo for $200K.

Considering Cuban sold Broadcast.com to Yahoo for $5.6 billion and O’Leary sold The Learning Company (he created the software behind the company) to Mattel for $3.6 billion, the two moguls could infuse a serious amount of cash — and toy know-how via O’Leary — into Toygaroo if they so choose. But, in the meantime, both will own a near-controlling stake in the company and will each be taking a seat on the board, so they’ll likely be calling the shots.

Pope was so excited about the investment she was nearly moved to tears, and I have to say it was pretty cool to see the sharks make her day like that. Way to go, Nikki.

That being said, I would say that Toygaroo has its work cut out for it in terms of convincing its users that it will be practicing, nay, ensuring, strong quality control when it comes to sanitizing its toys. Definitely also going to need liability insurance.