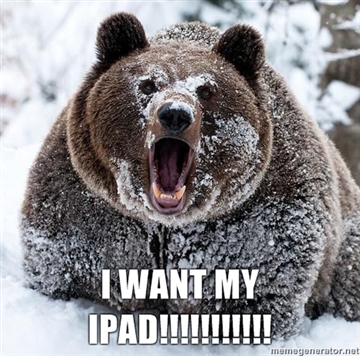 Hell hath no fury like an Apple fanboy scorned. Verizon is just now starting to feel the rage previously directed at just AT&T. That’s what happens when iPad 2 orders fail to ship on time. Fanboys take to the forums and unleash the beast.

There’s a large thread of complaints over on Verizon’s official forum that details most of the transgressions. It seems that more than a few customers where promised their iPad 2 would ship either immediately or within 2-3 days upon ordering. That’s not the case. It’s more like 2-3 weeks for some but according to two separate trusted Verizon retail sources, that was the same estimated shipping window given on day 1.

The common story in tl;dr format: Ordered my iPad 2 with VZW shortly as soon as it went on sale. The VZW retail/phone rep told me it was going to ship out ASAP and I would get it within days. That didn’t happen. It’s now two weeks later and I don’t even have a shipping confirmation yet.

Now there are slight variations to that story and it seems some customers on this thread either just got their iPad 2 or it’s en route via Fedex. But 17 pages of mostly complaints says loud and clear that this is not an isolated issue. Worse yet, Verizon apparently charged the full price upon ordering rather than shipping and policy dictates that pending orders cannot be canceled — or rather it takes some sweet talking the right associate to do so.

However, our Verizon retail sources told us 2-3 weeks was always the shipping window, even the first day they were available. Apparently a couple of their orders — these are VZW retail store associates — reached the buyers just days after ordering, but those where exceptions. They stated the iPad 2 shipping window is now 3-4 weeks, which is the same timetable as if ordered directly through Apple .

The good news is that this didn’t happen to all of the Verizon iPad 2 orders. Sure, that might be a little disheartening to hear for those still waiting, but some VZW iPad 2s reached their new owners within days of ordering. Even Apple sold out of its first round iPad 2s hours after starting sales. Verizon likely experienced the rush. It’s not unheard of for commissioned sales associates to overpromise and under deliver. Maybe Verizon’s inventory system failed to properly report the available supply. Any number of things could have gone wrong here.

We reached out to Verizon for comment but haven’t heard back yet. All customers can do now is wait. It doesn’t seem Verizon is doing anything to compensate those still waiting. There’s always the Motorola Xoom. Verizon can probably overnight a dozen of those.