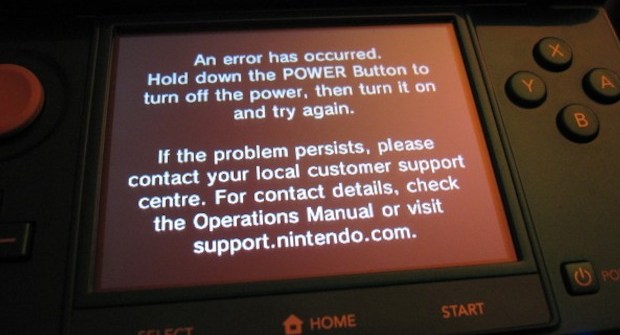 The 3DS is in the sweaty palms of hundreds of thousands by this time, and you know what that means: launch issues! Yes, like some other major hardware releases, the 3DS’s launch will not be without hiccups. There are reports that a few of the new handhelds are randomly crashing pretty hard to a black screen (seen above, and documented here) recommending a hard reset.

Don’t panic – this is only affecting a few users, and was initially only reported on Monkey Ball and Street Fighter. The situation isn’t really clear, but some are saying that there is an update rolling out that fixes this problem. Resetting as recommended seems to fix it for the moment, and some mention reformatting their SD card to FAT32 solves it. I’d say just hang on and let Nintendo address it, or if you’re concerned and can replicate the problem, take it back to where you bought it, if possible.

We didn’t run into this issue in our review unit. Any of our readers encounter this problem?

[via Nintendo3DSblog, Go Nintendo, VG24/7, and others]