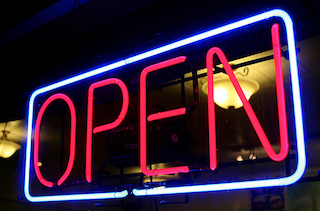 I’ve never liked Google’s use of the word “open” to describe the Android operating system. On one hand, the “openness” has led to situations where carriers can more easily screw consumers. On the other hand, their system is really only “open” when it’s convenient to be. Wanna include Google’s services on your Android device? Sure, sign this partnership agreement. Wanna check in code for Android? Do you work at Google? No. Well then you’ll have to wait. Open.

And then there’s the news that broke this week. Google, of “open” fame, is delaying the release of the source code for the latest version of Android, Honeycomb, Bloomberg BusinessWeek first reported. Why? So they can work on it and refine it. Behind closed doors. Open.

First of all, the fact that code has to be released at all says just about all you need to know about Google’s “open” claim. Facebook developer Joe Hewitt (formerly of Mozilla — an actual proponent of open) ripped Google a new one for this and other bastardizations of the word “open” last year.

His point wasn’t that Google’s model for Android is bad — it’s simply that the use of the term “open” is BS. And this latest development further emphasizes that. The real value of “open” to Google is as a marketing term.

Is Android more “open” than iOS is? Yes. But the way Google has been throwing around the word is in absolute terms. It has been “open” (them) versus “closed” (Apple). That’s simply not true. And in that context, being “more” open is like being “kind of ” pregnant.

That’s not to say there aren’t benefits of being more open — there absolutely are. But as Google will have to admit now, there are also clearly benefits to being more closed as well. As is the case with nearly everything, the situation is not so black and white.

So how long will Android be closed for? That’s not clear. Bloomberg cites Google as saying “at least for the foreseeable future” — which sounds sort of promising. But later in the article they note: “The delay will probably be several months.” Ugh.

It’s important to note that this won’t have an impact on some of the Android Honeycomb tablets already in the pipeline. Obviously, the first of those, the Xoom, is already out there in the wild. And more are coming shortly. But these will only be from Google partners, the big guys like HTC, Samsung, and Motorola. Anyone else hoping to tinker with Honeycomb and build their own tablets will have to wait. Again, likely for months.

In announcing the delays, Google is also admitting that they took a “shortcut” as Android lead Andy Rubin puts it. “We didn’t want to think about what it would take for the same software to run on phones. It would have required a lot of additional resources and extended our schedule beyond what we thought was reasonable,” he tells Bloomberg.

Why such a tight schedule? Well it’s never specifically mentioned, but you should be able to put two and two together — “two” being the keyword: iPad 2. Google clearly wanted to get the first Honeycomb tablet out before the iPad 2 came along and took over the tablet party once again.

So was it worth the rush? If you read the initial reviews or talk to people who have used the Xoom extensively (like Jason), the answer is pretty clearly “no”. And given the backlash Google is now facing over the closing of their “open” platform, the answer is even more clearly “no”.

But again, this is actually the right thing to do. If Google doesn’t lock down the Android source code and refine it, the end result is likely to be pretty messy. It would lead to a bunch of products that range from mediocre to bad to awful. And if Google really hopes for Android to compete with the iPad, they can’t have that.

I just hope we aren’t sitting in the audience at Google I/O this coming May hearing all about the epic battle of “open” versus “closed” once again. It sounds good — until you have to contradict yourself.