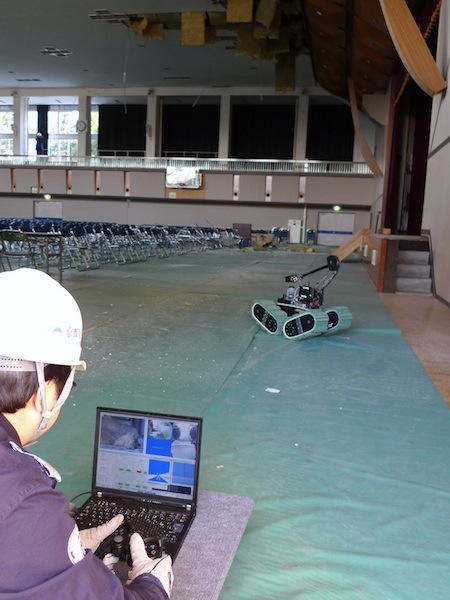 Why risk human lives when we have robots that could do the job just as well? That’s what a team of researchers at Kyoto University thought when it sent a mini rescue robot to investigate the inside of a partially collapsed building in Hachinohe, a small city in North Eastern Japan. Parts of the gymnasium’s ceiling fell down following the earthquake, making it too dangerous for humans to enter the building themselves.

Instead, the roboticists on site decided to use KOHGA3, a rescue robot first publicly shown in 2007 [JP]. The 40kg KOHGA3 can climb up stairs and move over rubble and other objects at an angle of up to 45 degrees.

It comes with three CCD cameras, sensors for gas/carbon-dioxide and attitude, an LED light, a thermal camera and an LED light. In the gymnasium, KOHGA3 was sent into the building and remote-controlled to scope out what damage was caused by the earthquake, for example in the roof and stage of the building.

Here is a video that shows how KOHGA3 was used (in English):

Via IEEE Spectrum (Thanks, Erico!)