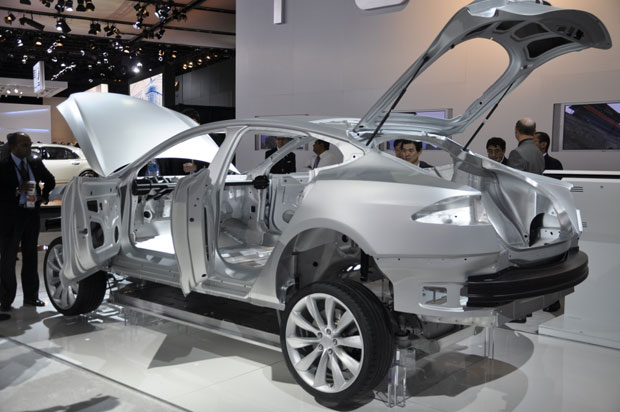 When Tesla’s Elon Musk first came to Silicon Valley he was researching advanced, highly-energy-dense super-capacitors at Stanford. Coincidentally, when speaking at the Cleantech Forum in San Francisco about the future of electric vehicles Musk said, “If I were to make a prediction, I’d think there’s a good chance that it is not batteries, but super-capacitors.”

Super-capacitors are similar to batteries in that they both store energy. But in electric vehicles, super-capacitors would be much more efficient at storing the massive amounts of energy taken in during regenerative braking. And when the time comes to accelerate, the super-caps would be able to deliver the that large amount of energy much faster than batteries, with less energy loss.

Currently, hybrid vehicles have batteries because super-caps cannot store the same amount of energy pound-for-pound. Super-capacitors require a large amount of surface area to store a large enough amount of electricity to be useful for electric cars. However, the introduction of nanotechnology could increase surface area exponentially, as recent experiments have shown. Picture infinitesimal conductive surfaces storing electrons for rapid use; no more chemical reactions requiring huge and expensive thermal management systems would be needed.

Seeing how Musk creates electric cars powered exclusively by lithium-ion batteries, his comment on batteries seems a bit out of place — unless his company is at work researching the next big thing.