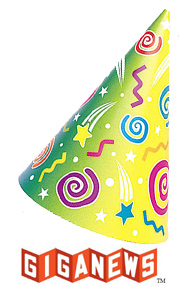 Oh dear, another Usenet post. Quickly now, as we don’t want to draw too much to the last interesting place left on the Internet. Giganews recently hit 900 days of retention, and they’ve announced that they expect to his 1,000 days of rentention—just think about that for a second—on May 2. To celebrate, they’re having a bit of a contest.

What can the good people of Usenet-land expect? Well, the grand prize is a 5TB Drobo unit. Clever prize, that. Smaller prizes include an iPad 2, PS3, Xbox 360, and the always-present-in-these-types-of-things branded t-shirt.

They’ve gone all social media this time around. You can enter by being a Diamond member of the service, but you can also tweet about the fact that we’re approaching 1,000 days of retention, “like” the company on Facebook, and so forth.

You can also the good old fashioned way by signing up with your e-mail address.

And now we return to Usenet radio-silence.