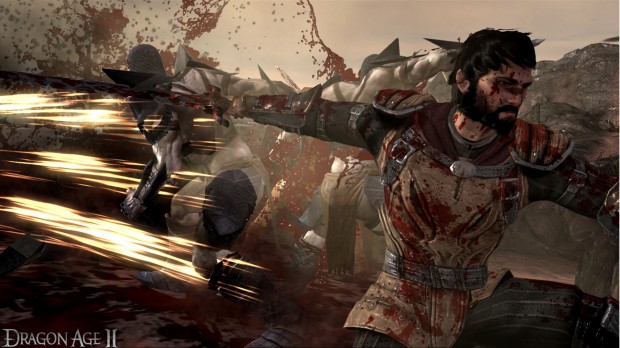 Short version: Dragon Age II is a simplified sequel to probably the best RPG I’ve ever played on a console. With that in mind, I came to this game excited, open, and interested. Yet Dragon Age II feels like playing an MMORPG without the MMO part. RPG fans, this one is easy to skip. Go back to Dragon Age: Origins. It’s cheaper and better.

Woof. First, the graphics are outdated. Maybe the game looks better on a PC but have you seen Crysis 2 on a console? I have, (review coming soon) and Dragon Age II is nowhere close. The characters look nice, sure but the environment is plain and full of low-res textures. I don’t really get why because there aren’t a lot of characters to move around. The blood effects are interesting but doesn’t help the overall emptiness I felt while playing. Maybe because the whole environment is empty. The cut scenes are as empty as they can be with mediocre acting. Blood gets on the faces exactly the same way. 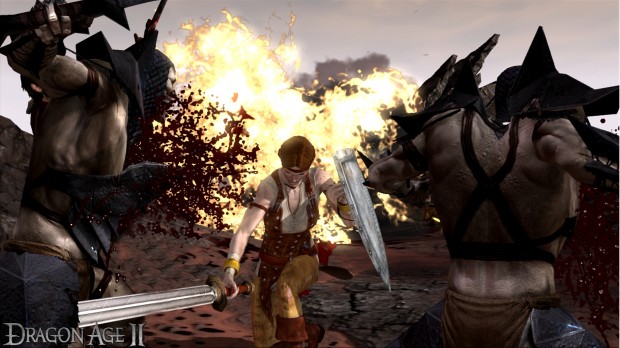 The maps and other graphics however are great. Narrations for example, feature some really neat stuff that suggest good production values. Too bad this can’t be said about the actual game play.

There is no main storyline to follow. There are smaller stories that should connect at some point through the game but they don’t. Basically after fleeing Lothering you have to make a name for yourself in Kirkwall. You start as a refugee and slowly make your fortune by completing missions. Without a main plot though, there is a lack of immersion.

SPOILER
My biggest issue with this title? Here’s a quick SPOILER: There is no final boss in this game, nor will you save the world from imminent destruction. You will however massacre petty thieves without mercy.
SPOILER

Most of the quests are about going somewhere and killing someone. As there is no main storyline and the combat action isn’t good enough to compensate. It’s clear that Dragon Age II has been simplified and stripped from some of the predecessors’ complex elements. As I said before, most of the time it just feels like an MMORPG without the MMO part.

The whole game system has been simplified in Dragon Age II. You can only play as a human this time, there is no option to select any other race. Options are limited to selecting your gender (makes no difference at all in the game) and selecting your class: warrior, rogue or mage. A big difference here is that your character will now have a voiced response to all the dialogs throughout the game a la Mass Effect. The dialog wheel let’s you choose from three response types: funny, kind and aggressive. Aggressive is mostly rude, kind is idiotic and weak. I usually just chose “funny” responses because they didn’t ruin the game altogether. Some of these choices have an effect on later missions. Stuff like taking a specific character with you for a mission can actually change the outcome. Neat.

As you level up your characters you have to choose from different talent trees to learn new skills. You also manage inventory for all your characters but only within certain limits. You can’t for example, change the weapons or armor other than your main character.

Combat has been sped up so Dragon Age II almost feels like an action game. It’s stuck somewhere between an RPG and a 3rd person hack’n’slash and there is a lot of suffering because of it. If you concentrate on dealing damage as a warrior, your team will die. If you give orders to them , you miss out on all the action. I ended up consuming potions and doing most of the damage alone. 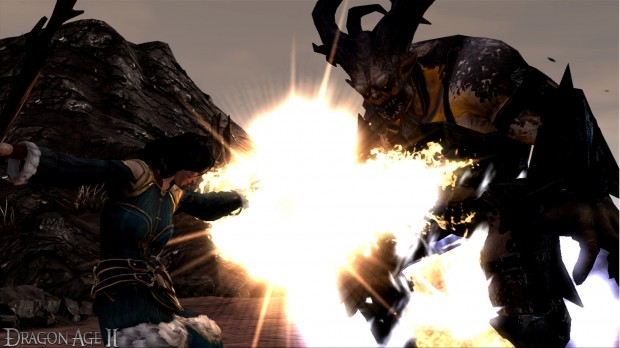 It’s clear what Bioware was trying to do with Dragon Age II: Simplify it, put in a lot of blood and make it more action-based. They ended up stripping the good stuff out, the stuff that grabs you into the story and doesn’t let go to the end. And then you beg for more, only there isn’t any more. There isn’t enough action and there isn’t enough role playing. And, you know, with little matter of Bioware manipulating the score for our own game on Metacritic, it seems that Dragon Age II delivers less than its’ predecessor and that everyone knew it.