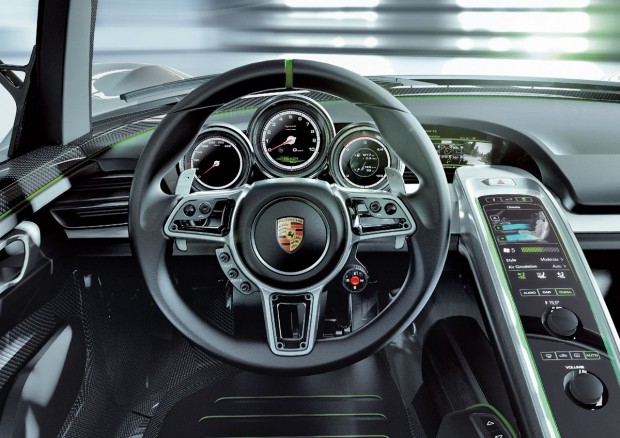 Porsche has decided to begin taking orders for their highly-received 918 Spyder Plug-in Hybrid. Dealers have been given the go-ahead to begin taking orders for the limited (918 units) $845,000 car. The 918 Spyder is powered by a 500-plus horsepower V8 gas engine which gets assistance from two electric motors producing an addition 218 horsepower. 0-60 times are estimated to be near 3 seconds. 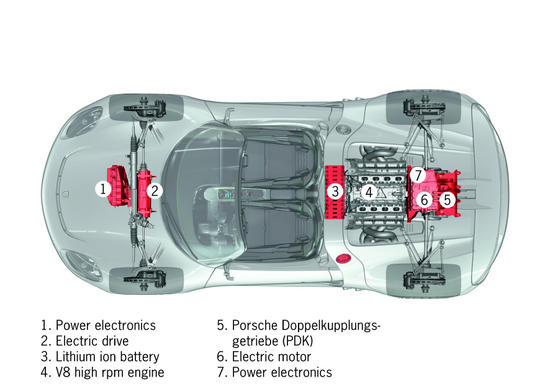 With all the power, one would expect terrible mileage; but the 918 Spyder is said to have a claimed 78 mpg consumption rating on the European cycle (which is always higher than EPA). After a full charge from a regular home outlet, the 918 Spyder will be able to go 16 miles on all electric, before requiring the gas engine. Charging time for the fully-depleted lithium-ion battery is 7 hours on 110V.

Production is expected to begin in Germany starting September of 2013.

ATLANTA – March 21, 2011 — After outstanding customer response to the concept car first shown at the 2010 Geneva Motor Show, Porsche today announced that dealers around the world will begin taking 918 Spyder customer orders. This is a significant step toward actual production of the company’s next super sports car, a Porsche that marries unique plug-in hybrid technology and outstanding performance in a visually stunning and purely Porsche package.

The 918 Spyder will feature a high revving 500-plus horsepower V8 engine assisted by two electric motors with a total of at least 218 horsepower, yet Porsche estimates it will consume only 3.0 L/100 km based on the New European Driving Cycle (NEDC). Official EPA fuel economy figures or estimates will be announced just before the first customer cars begin arriving in the United States near the end of 2013.

To ensure the 918 Spyder’s worldwide exclusivity, Porsche will produce no more than 918 examples. Start of production at Porsche’s famed factory in Stuttgart-Zuffenhausen is planned for Sept. 18, 2013 (9/18), and the U.S. base manufacturer’s suggested retail price is $845,000 (excluding destination and handling charges).

With its design inspired by past Porsches like the Carrera GT super sports car and the legendary 917 and highly successful RS Spyder race cars, the 918 Spyder remains faithful to the 2010 concept car. Unlike the concept car, the two-seat production version, based on a carbon fiber-reinforced plastic monocoque, will feature a manual roof system with removable panels that can be stored in the front luggage compartment.

Super high performance with very low fuel consumption and emissions
The 918 Spyder will be powered by a unique plug-in hybrid system that will include a high-revving, mid-mounted V8 engine with capacity of more than 4.0 liters and producing at least 500 horsepower. The engine will be based on the Porsche RS Spyder racing engine that demonstrated its impressive performance and efficiency through multiple Michelin Green X Challenge victories in the American Le Mans Series, the Le Mans Series and the 24 Hours of Le Mans. Power will be transferred to the rear wheels via Porsche’s compact, seven-speed Porsche-Doppelkupplung (PDK) double-clutch gearbox.

Two electric motors – one each on the front and rear axles – together will provide approximately 218 additional horsepower. This configuration also will offer an innovative, variable all-wheel drive system with independent control of the drive forces on both axles. Electrical energy will be stored in a liquid-cooled lithium-ion battery that can be recharged from a standard household outlet. Electric-only driving range is expected to be more than 16 miles on the NEDC. Recharge time will depend on each country’s electrical power network, but charging is expected to take about seven hours at 110V/10A in the United States. A quick-charge option is being evaluated to further reduce charging times.

With anticipated combined fuel consumption of just 3.0 L/100 km on the NEDC, this equates to CO2 emissions of only 70 g/km or 112 g/mile. On the other hand, the Porsche 918 Spyder will deliver super sports car performance. It is estimated that the final production version will accelerate from zero to 60 mph in about 3.1 seconds on its way to an estimated top track speed of 199 mph. It should also tackle Germany’s famed Nürburgring Nordschleife in less than 7 minutes and 30 seconds, two seconds faster than the Porsche Carrera GT. Under the right conditions, the 918 Spyder will be able to drive on electric power alone at speeds up to 94 mph for limited distances.

Customers who order the 918 Spyder also have the opportunity to acquire a special-edition 911 Turbo S Coupe or Cabriolet. Also limited to no more than 918 units, the 911 Turbo S Edition 918 Spyder will have exterior and interior design elements echoing the plug-in hybrid 918 Spyder supercar’s styling. It features similar exterior colors, carbon-fiber elements inside and out, enhanced leather equipment and numerous acid-green accents on items such as the brake calipers, illuminated sill plates, interior stitching and instrument cluster needles. A limited-edition badge on the glove compartment door will feature the same production number as the customer’s 918 Spyder.

Worldwide 918 Spyder customers can begin ordering this special edition 911 Turbo S sports car today, and customer deliveries will start later in 2011. The U.S. base manufacturer’s suggested retail prices for the Coupe and Cabriolet versions are the same as the standard 911 Turbo S models, $160,700 and $172,100 respectively, excluding destination.

About Porsche Cars North America
Porsche Cars North America, Inc. (PCNA), based in Atlanta, Ga., is the exclusive importer of Porsche vehicles in the United States. It is a wholly owned, indirect subsidiary of Dr. Ing. h.c. F. Porsche AG and employs approximately 220 people who provide parts, service, marketing and training for some 195 dealers. From its inception in 1948, Porsche has been a leader in advancing vehicle performance, improving automotive safety and developing ever more fuel efficient technologies in its high-performance models. At the core of this success is Porsche’s proud racing heritage that dates back to its beginnings. Today, with some 30,000 motorsport wins, Porsche is recognized as the most successful marquee in sports car racing. PCNA, which imports the iconic 911 series, the Boxster and Cayman sports cars, the Cayenne SUV and Panamera Gran Turismo strives to maintain a standard of excellence, commitment and distinction synonymous with this historic brand.