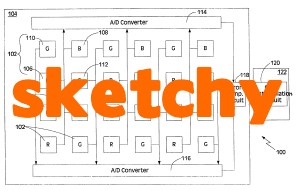 We just heard about a legal action by Microsoft against Barnes & Noble (to be fair, not quite trolling, but bordering on it), and now I’m reading about a new one, directed at pretty much every major manufacturer of mobile hardware. The patents allegedly infringed upon are related to the cameras used in the phones. And yes, it’s sketchy.

The company suing is one “Imperium Holdings,” based in the Cayman Islands. Yeah, that sounds legitimate! The patents are perfectly legitimate engineering implementations within image sensors, and are certainly not at fault. One, for instance, describes a simple and specific system for saving power by turning off unnecessary analog-to-digital converters when using low framerates. So why are they suing Apple and Kyocera instead of Omnivision or Kodak, creators and sellers of image sensors used in such phones?

After all, these phone makers just bought products that were being sold legally, and which Imperium Holdings did not object to directly. If someone made a knockoff Tabasco sauce, and hot dog vendors started carrying it, would Tabasco go around suing hot dog carts one by one? No, they would sue the knockoff company. I sincerely doubt that all, if any, of these companies was responsible for designing or manufacturing the imagers used in their products.

Sounds to me like a money grab. Somehow I doubt we’ll be hearing about this particular lawsuit again.