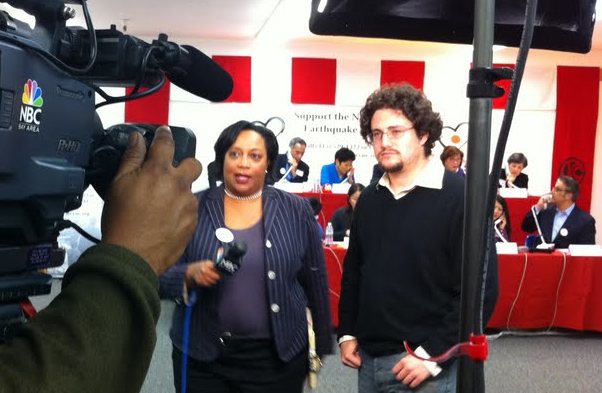 As Japan works to recover from the horrendous earthquake and tsunami that struck last week, many companies and citizens are donating what they can to help. One of the easiest ways to help is to send a text message to the Red Cross (text REDCROSS to 90999 to make a $10 donation), but there are plenty of other options, particularly if you’re looking to support a certain charity or organization. Today, Causes founder Joe Green told me that tens of thousands of donors have given some $700,000 to Japan relief efforts thus far via the online platform.

As for the photo above — right now Green is appearing on a local Bay Area NBC special, where a phone bank sits ready to receive calls for donations to the Japanese Cultural & Community Center of Northern California. Salesforce has just agreed to match up to $25,000 in donations to the effort — which comes in addition to the $100,000 they already matched for donations to the Red Cross. You can find the JCCCNC’s Cause right here.

Green says that over 20 organizations have been using Causes to help raise funds for Japan (which probably makes it the largest multi-charity donation platform). These charities benefit from relatively easy transaction processing (which is conducted by Network for Good), and users who donate will be guided through the viral steps that are Causes’s bread and butter. One small nit, though: the credit card companies have yet to waive their processing fees for Network For Good (which they did following the Haiti earthquake) so Causes is still having to charge a small fee for each donation. Green is hopeful that the credit cards will waive these fees once again.

Other notable fundraising efforts include LivingSocial’s pledge to match over $1 million in donations (it’s matching all $5 donations through this deal, which is still live).