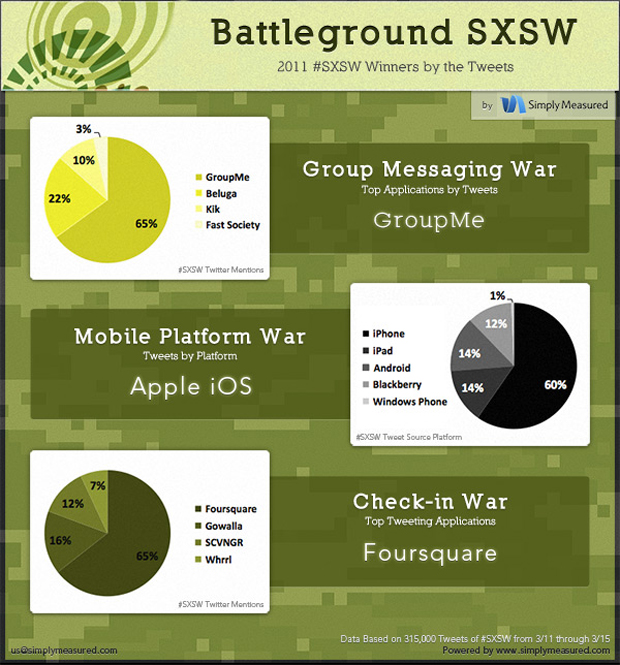 SXSW Interactive is no longer about the panels or keynotes, having become a five day experiment in the ability of technology to withstand the load of over 20,000 influencers congregated in the same location, trying to network using various digital tools. It’s some sort of sped up playground for app and device Darwinism, where the rest of the world functioning as a control group.

SimplyMeasured has analyzed the #SXSW tweet streams and come up with some preliminary results to the booze-fueled undertaking. According to SimplyMeasured’s data, GroupMe dominated people’s #SXSW Twitter streams in the group messaging class with 65% of the mentions, iOS devices won the platform battles with 74% of the tweets (split into 60% for the iPhone and 14% for the iPad respectively) and Foursquare won the location based check-in war at 65%.

While SXSW didn’t beat the Oscars or something called “@charliesheen week 1” in terms of sheer size of tweet numbers it did put in a good showing with 315,000 #SXSW tweets versus the #Oscars 1.2 million and @charliesheen week 1’s 980K. (#winning)

Geo-location analytics company Geotoko also confirms Foursquare’s victory, breaking down the check-ins by app in a list of 31 select Austin locations and tracking over 48,279 check-ins during the entire five day period (below). Foursquare again emerged as the forerunner here with 32,392 check-ins, Texas native Gowalla coming in second at 8,030 check-ins and Facebook Places demonstrating a poor showing in light of the size of its user base at 7,545.

Foursquare’s Dennis Crowley gave us the raw numbers while at SXSW, holding March 13th 2011 up as the biggest check-in day in company history, “The numbers are amazing,” Crowley says. “We normally do about 2 million check-ins a day — now we’re at 2.6 million.”

Final conclusion: Someone should really build an iPad/iPhone that only focuses on location-based group-messaging. Stat.