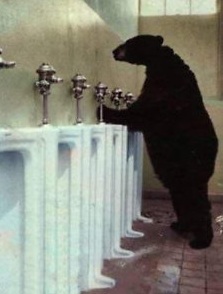 I don’t even surf, but after reading this eBay UK listing for a slightly worn wetsuit I almost want to buy it. The seller, Dan Morgan, manages to work in “an old man’s testicle,” his own hygiene habits, and a “bear using a urinal.” The key to good advertising copy is to tell a story. He’s doesn’t just describe the “used XCEL 3-2mm Infiniti Drylock Summer Wetsuit” for sale, he wraps a narrative around the wetsuit.

And it’s hilarious. I’ve reposted the description from the eBay listing below for posterity. Remember, the key takeaway here is that he has “NEVER urinated in this suit.”

The listing is already going viral. Seeing a marketing opportunity, XCEL Wetsuits is donating a second, brand new wetsuit to the winner, and DryRap is getting in on the action too by throwing in their changing towel, so to speak. The bidding is up to 640 Pounds, even though Morgan bought the original for only 300 Pounds. He will donate 90 percent of the proceeds to the Red Cross for Japan relief.

The listing is brilliant, as they say in Britain. Unfortunately, eBay doesn’t think so. Morgan says he’s been contacted about some of the language and “unprofessionalism” of the listing (they don’t like the picture of the bear, apparently. Maybe it’s got something to do with false advertising). As a result, eBay is threatening to remove the listing. But it’s not offensive. (Brits are allowed to swear, see all of Paul Carr’s posts). It’s just good marketing. And almost all the money is going to charity, so eBay would look pretty callous if it does remove it. 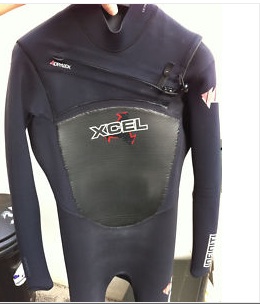 I bought this wetsuit brand-new last year and have worn it a fair bit. When I say ‘fair’ I reckon about 20 times, but then probably more like 30. A fair few times anyway.

HOWEVER you will like this, If it was not being worn, it was hung on a hangar or rolled to prevent creasing AND I rinsed it in fresh water after EVERY session so it’s in VERY good condition as I look after my gear, I always do, similarly I take care of my body and shower at least once a day and always moisturise. Yes you’re probably getting a feel for the kind of man I am. You can see from the pictures it has no creases and looks lovely. My friend Gaz has got a wetsuit that he doesn’t look after and it looks like an Elephant’s arse, all wrinkled, a bit like an old man’s testicle.

You’re probably thinking “People p*ss in wetsuits, I’m not sure about a second hand wetsuit”, but believe it or not I have NEVER urinated in this suit, seriously, these suits are too good to be doing such a vulgar act in, the wee just ends up staying in the suit and then when you’re sat having a post-surf pint in the pub you smell awful and girls don’t like boys that smell of p*ss so you just sit there, alone all night, sobbing into your pint of Betty Stoggs like a lonely desperate p*ss smelling man.

I’ve included a picture of a bear using a urinal, this is how I normally use the toilet, notice that the animal is not wearing a wetsuit. Although I am not a bear, I, like a bear, do not p*ss in wetsuits.

It’s a size medium or “m”, it was the top of the range suit when I bought it, I think I paid around £300 for it, still a great warm suit that will make you surf at least 200% better. It won’t really but it will keep you warm and it’s flexible so you’ll be able to throw your arms around like Beyonce whilst you’re bouncing along a wave. People will look at you and say “f*ckin hell check that dude out, he knows what he’s doing wearing one of those Xcel suits and he’s got some fresh dance moves”. They probably won’t say this.

Now as it’s been worn, there’s some signs of wear around the neck, which I’ve taken pictures of, so you don’t say “oi you c*nt, there’s area of wear around the neck I’m giving you bad feedback”. The pictures make it look worse than it is (because they’re close-ups), and I’ve taken the pictures with the suit turned inside out, when it’s the right way round you don’t see the wear and it has no effect on the performance of the suit. That was a bit boring wasn’t it, but it had to be done so you can’t take me to eBay court for not being honest with you.

Why am I selling it? Well I’ve just bought a new one, as I’m a flash tw*t like that, I tend to get a new suit every season, I just like the feel of fresh neoprene on my soft skin, and well to be honest I could do with some cash to pay for prostitutes. No, that was a joke, now you’re going to think the suit is riddled with disease but it’s not as I was joking I do NOT engage with ladies of the night.

I’ll post it out the next working day following cleared payment, or if you’re around the Truro area you can come and collect it thus avoiding postage charges. Having said that, if you’re a maniac, maybe you should just let me post it to you as I don’t want to be murdered to death, especially as the summer is just beginning! WOO HOO.

Any questions just ask, I’ll answer them very quickly as I’m sat at a computer all f*cking day, unless there’s waves.

Thanks for looking and reading all of that ridiculous text, I hope you have a wonderful day.