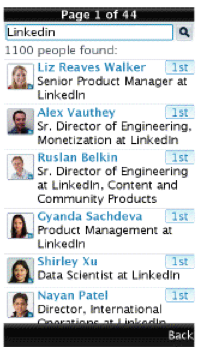 Professional social network LinkedIn has a rapidly growing userbase outside of the U.S., and increasingly users want to access the network from their mobile phone. But until now, the company has only offered smartphone apps, as opposed to feature phone apps. Feature phones actually represent 80% of the devices sold worldwide. Today, LinkedIn is teaming up with mobile developer Snaptu to launch a rich application for feature phones.

According to the announcement, the app will work across 2,500 device models, including those from Nokia, Sony Ericsson, and LG. Snaptu focused on bringing the most commonly used LinkedIn features in the new app, allowing users to access their update stream, search professionals on the network, invite fellow users to join their network and accept invitations. Users can also access full users profiles of professionals on LinkedIn.

Facebook also made a similar move, partnering with Snaptu to launch a similar rich app for feature phones. For LinkedIn, this app is particularly important as much of its active userbase is international, where feature phones are more popular that smartphones.