Zynga is debuting its previously announced points program, RewardVille, today which adds a rewards layer across all of the social gaming giant’s games. Now, Zynga’s 250 million players can earn “zCoins” when they are playing Zynga’s games on Facebook and other platforms.

As you play more of Zynga’s games, you earn zPoints and zCoins which can then be used towards purchasing exclusive virtual goods on RewardVille. The new program is essentially tying rewards between all of Zynga’s games, including CityVille, FrontierVille, FarmVille, Mafia Wars, Zynga Poker, Café World, Treasure Isle, YoVille, PetVille, and Vampire Wars.

So users can now earn zCoins and zPoints by playing Zynga games. You can spend your zCoins on cool in-game items in Zynga RewardVille!For some users, Zynga has already enabled them to earn the points. Other users will have to go to RewardVille’s website and activate the program. Once you’ve activated RewardVille, earning zPoints lets you advance your Zynga level, gain zCoins, and just as in the games, unlock different RewardVille items along the way. You can earn as much as 80 zPoints per game or 300 zPoints total in one day. You’ll be able to see how many points you’ve earned on your Zynga Game Bar on Facebook. The more you play Zynga games, and the more Zynga games you play, the faster you’ll level up and earn rewards in RewardVille.

In order to redeem your zCoins, you have to visited RewardvVille’s site where you can sign in with Facebook Connect. Zynga will automatically tally how many points you’ve earned and you can use redeem points for limited edition virtual gifts, such as the “Stepped Skyscraper” in CityVille or a “Ring of Fire” in FrontierVille (you can only redeem virtual gifts with points, not cash/credit card). And you can send mystery gifts across games to friends playing other Zynga games.

The idea behind the program is to get users to start playing multiple Zynga games so they can earn more rewards. It unifies the gaming portals rewards and incentivizes users to play Zynga games on Facebook, so they earn these rewards.

So how does Facebook Credits fit into this? The reason Zynga is not using real money with RewardVille is because of Facebook Credits. Facebook recently mandated that Credits will be the exclusive way for users to get their ‘real money’ into a game, but developers will still be allowed to keep their own in-game currencies. I’m assuming RewardVille’s zPoints and zCoins will be considered an in-game currency.

Of course, RewardVille also gets users to start interacting with Zynga games off of Facebook, which is interesting considering the two company’s tumultuous history. Things seem to be peaceful now, but I’m curious how RewardVille will effect the relationship. 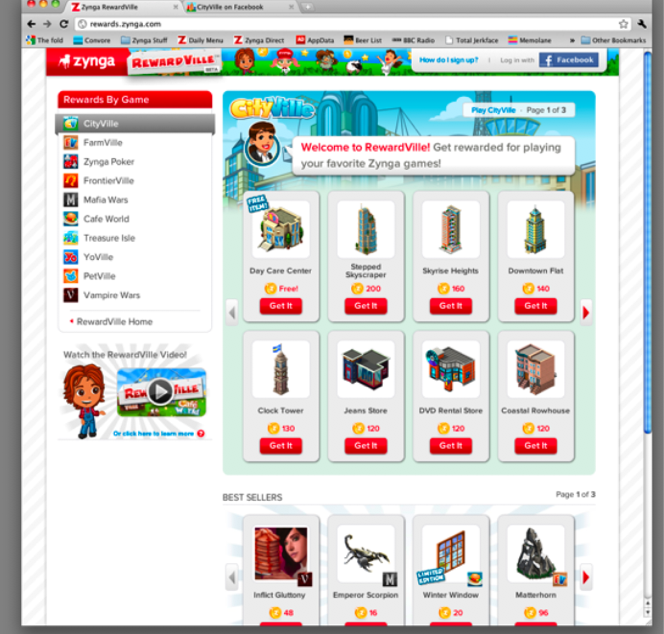