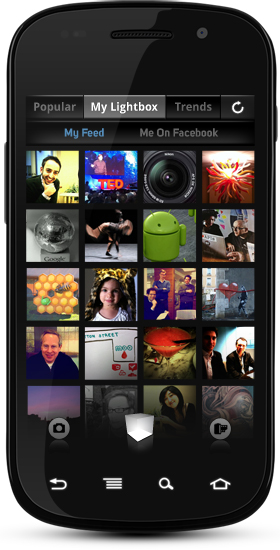 Although Android adoption is growing at a huge clip compared to the iPhone (not hard, since there are so many more devices and plans), iPhone apps still remain the benchmark for the smartphone app experience. In part this is down to the fact that many companies build an iPhone app first and an Android version some time later, which is often inferior in user experience. Part of the reason is that little things like the pull-down-to-refresh features that are often in Phone apps come default with the iOS platform. But to make that kind of feature work in an Android app you have to build it from the ground up.

That means there is a space for a creator of ridiculously good Android apps. Step forward Thai Tran and Nilesh Patel with Lightbox, their new startup which has taken a $1.1 million seed round from some of the top VCs and Angels in the UK and US. A private beta of their first app, Lightbox Photos, launches this week at SXSW, with the founders in attendance handing out invitation codes to the private beta. The app will be presented at the Team Android Choice Awards. You can sign up here to get on the invite list for the app here.