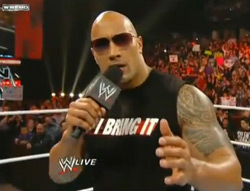 Here’s a fun one for your Thursday afternoon enjoyment. It looks like Universal Studios is currently shopping around a script to re-make the Doom movie, only this time it will be shot in 3D. Will Dwayne “The Rock” Johnson return? (That’s him to the left, cutting a promo on John Cena, as you do.) Unknown. Will the movie be nothing more than empty action? Almost certainly.

The movie, says What’s Playing’s Hollywood Insider, will “entirely [skip] over the events of the insipid 2005 film ,” which is slightly unfair. The movie was based on a game that, nearest I can tell, had no plot whatsoever. Something about Hell monsters on Mars. The game wasn’t trying to be anything more than “ahh, monsters, shoot!” so to pan the movie for not being, I don’t know, a Terrence Malick work of art seems slightly unfair.