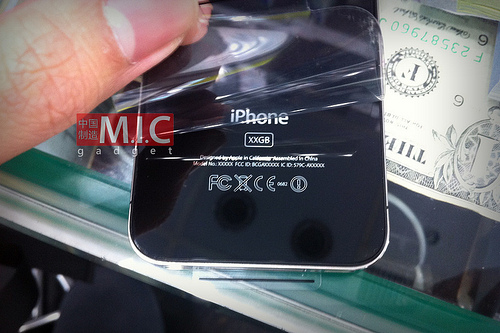 The backstory isn’t exactly detailed, but somehow M.I.C. Gadget got their hands on what seems to be an unreleased 64GB iPhone. All they’re stating is that the phone is not for sale and it was “definitely leaked from Foxconn’s factory in Shenzhen.” True? We don’t know, but it at least seems like the real deal. The backside shows a model number of XXXXX and an FCC ID of BCG-AXXXXX — just like Gizmodo’s prototype iPhone 4. The software however registers the phone with a model number of 995-6049LL running iOS 4.1 and is not SIM-locked. Best of all though, the phone shows 64GB of storage.

Interestingly enough, the casing itself seems void of any changes. Even the external antenna is the same, which seems to state that either this is a fake — possible — or Apple is following previously-set precedents and throwing accessory makers a bone by keeping the casing the same for another model year.

Still, it’s anyone’s guess if this is the real deal. It is slightly different in several key areas — silver ring around the lens, symbols on the volume buttons, different faceplate — from the last purported 64GB iPhone posted by M.I.C. Gadget. You may wanna peep the video after the break before coming to any conclusions.