If you are a group texting startup worth your salt, you’ve got to have a new app ready for the upcoming SXSW conference in Austin. GroupMe, Beluga (which was just bought by Facebook), Kik, TextPlus, and offshoots like Yobongo will all be strutting their stuff. Not to be outdone, Fast Society just pushed out a completely revamped iPhone app and an Android app will be coming out later today as well. 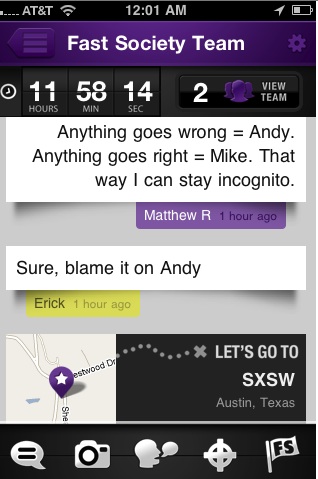 I recently visited the three-man team in the New York City’s Dog Patch Labs. CEO Matthew Rosenberg game me a demo of the new app (see video above). Instead of simply launching a group chat into SMS, it takes advantage of push notifications to bring the message stream into the app itself, much like GroupMe’s latest release.

The app is a vast improvement over the previous version. You can create up to five temporary or permanent groups with up to 25 people in each. The app let’s you chat, add photos inline, initiate conference calls, or share your location. Fast Society also offers some unique features such as the ability to record a short audio “Shout Out” like a group voicemail that gets sent right into the stream. It also lets you distinguish on a map between where you are and where you want to go.

Creating a new team is easy with the “rally” feature that sends out a prompt to everyone in an existing team. You can also share an invite out via Twitter or Facebook and then only let in the people you want to hang out with (I know, that could turn mean). There is also an archive feature, which lets you relive past group texting moments with your friends (it’s all kept server-side).

How is Fast Society going to break through all the noise? For one thing, it is offering free rides from the Austin airport to SXSW to anyone who downloads the app. The startup is going up against much better funded competitors—GroupMe raised $10 million and Beluga is now part of Facebook. Fast Society so far has only raised $275,000 in seed capital from Eniac Ventures, Quest VC, and hedge fund investor Jim Pallotta. Rosenberg says he’s been able to keep SMS costs under control by entering int an agreement with an SMS aggregator which charges a flat fee for unlimited texts instead of a penny or more per text. That should help Fast Society scale cost-effectively. Now all it’s got to do is win over those group-texting partiers at SXSW and beyond.