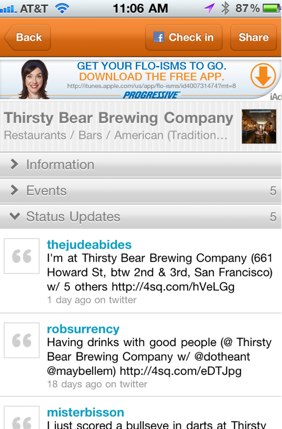 Fwix is launching new iPhone and Android apps that include the new places functionality to give users contextual information around businesses and neighborhoods. So Fwix’s technology will aggregate all the relevant social information around you can look for information around destination and places on the fly. Fwix says it will be geotagging check-ins, geotagged Tweets, reviews, events and local news and blog posts.

This is all part of Fwix’s evolution as a local data platform that is organizing the world’s information by location. A number of media publishers building on top of the company’s API including NBC, AT&T Interactive, New York Times Company, Viacom (BET.com), and others. By indexing the Web by location, Fwix is operating in 7 countries; 61,000 cities; and defined down to 87,000 neighborhoods in the US alone. Fwix says that its content and platform reaches more than 30 million uniques per month.

Hyperlocal news is consolidating with acquisitions, and Fwix has an compelling take on the sector by offering its data as a platform. It should be interesting to see if the startup ends up getting swallowed by a big media company in the coming year.