Google is making its local directory Places a bit more social today by allowing users to share Hotpot recommendations and reviews on Twitter directly from Google Maps for Android Phones. As you may remember, Hotpot is Google’s new local recommendation service that allows you to rate and review Places. 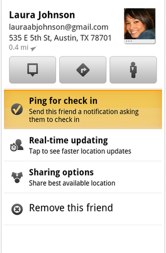 Google has added another minor feature to the Maps app relating to check-ins. As we wrote in early February, Google began rolling out the ability to check-in to Latitude, which now has 10 million active users.

Today, Google is allowing you to contact any nearby friends on the map, by “pinging” them instead of texting or calling. According to Google, if you “ping” someone they will receive an Android notification from you asking them to check in at a place. And when they check in using your request, you’ll get a notification right back so you know which place to go to meet up with them.

Yes, it’s a little confusing. And you can only ping other Android phone users. But in the context of Google’s new social agenda, it is interesting to see the search giant adding more social features to its products.