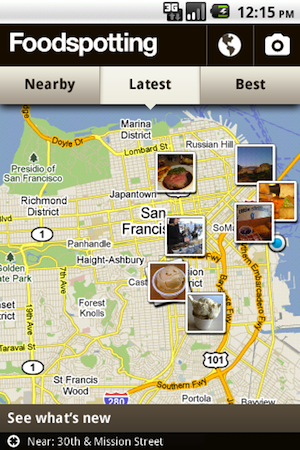 Back in December of last year, I noted the existence of the first Foodspotting build for Android just in time for the holidays. Turns out, the app was a little undercooked — still in beta — and the team didn’t really want me giving out the link to download it. Whoops.

Well, for those that didn’t, here’s your real chance. Today, the app officially launches in the Android Market.

It was almost exactly one year ago when we first wrote up Foodspotting’s initial app for the iPhone. At the time, they were getting ready for a big SXSW push. And it worked. The iPhone version has seen some 650,000 downloads since then, which has helped them get over 360,000 food photos in their database. It also led to them getting a fresh $3 million round of funding, which now makes the Android app possible — and an even bigger push for this year’s SXSW.

With regard to the Android app, it is important to note that it’s still a “light version”. I noted this back in December, pointing out that it was missing some of the more advanced profile features that the iPhone app has. But this build is much more polished and does allow you to do the two most important things in Foodspotting: take pictures of food and look at pictures of food.

Of the Android build, Foodspotting says:

A more feature-full version of the app will be released in the coming weeks – which will include a profile and guides. Right now, we’ve focused on the pertinent actions of helping people find foods around them, and upload photos to recommend foods. We’ve had such great demand for an app from our community who are on Android phones, that we wanted to release this, and then continue iterating.

As for SXSW, Foodspotting is hosting The Official SXSW Street Food Fest (in conjunction with BlackBerry). That means Austin’s best street food vendors will be out in full force and SXSW badge holders will get in for free. And there’s going to be a food scavenger hunt.

Look for Foodspotting in the Android Market shortly. It will be a free download.