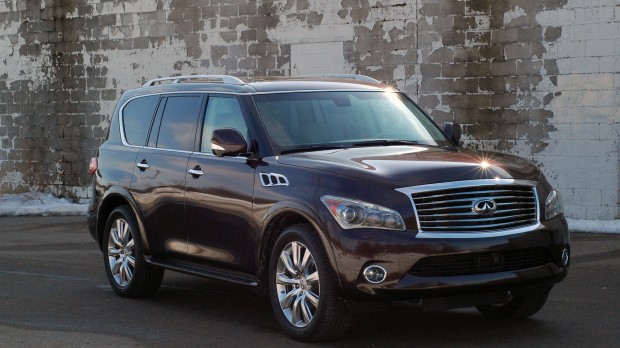 First impression? The 2011 Infiniti QX56 is a monster. Like really big. I grew up in a world of Tahoes and Suburbans, but this Infiniti QX56 feels the size of a Bradley Fighting Vehicle — with a fancy plush interior of course. I’m not entirely sure why the civilized world needs such a large vehicle just to move snotty kids around town but I like it. In fact, out of all the vehicles we’ve drove lately — including the $101k Range Rover Supercharged and Audi A8 — this one is the most comfortable.

The QX56 is all about techy creature comforts. The driver’s seat is like a leather-wrapped command center. With the sheer amount of buttons around, it’s hard not to get overwhelmed. But once you start driving. Oh man, the optional hydraulically-controlled suspension takes over and it’s as if you’re piloting a 6,000lb pound fluffy brown cloud. 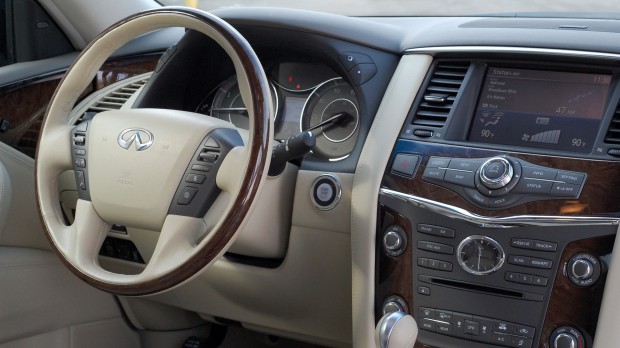 We have the QX56 for a week and I already like it. The electronics are plentiful, perhaps a bit much, but presented in a restrained manner. The QX56 shares much of its interior layout with the M37s. I hated the design in the sedan, but the large canvas available in the massive SUV allows for a much less cluttered feel.

We’ll put some miles on the truck and report back later in the week. First up will be a look at just the infotainment system — navigation, media playback, rear seat entertainment, and the 50 zillion buttons — with the full review coming towards the week’s end. Oh, and yeah, there’s a 400HP monster V8 under the hood that’s averaging just 11.6 MPG so far. Sigh.