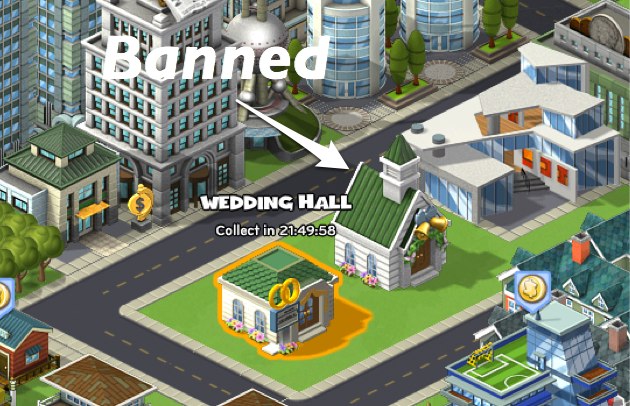 Zynga made a small but fascinating change to its young-yet-ubiquitous game CityVille over the weekend. Players could previously buy “Wedding Chapels,” which looked like small country churches but without a cross or other religious symbols, to add to their city. But the virtual item has been removed and replaced with the more secular and nondescript “Wedding Hall.” With two gold ring things that somehow makes me think only of McDonalds.

I asked Zynga if this was in response to complaints, or otherwise why they did this. No comment from them so far. They could, of course, simply add other icons for other religions, and let people choose.

But perhaps even that would be too insensitive. Players who had previously purchased the Wedding Chapel still have it, but it’s also been renamed to “Wedding Hall.” Presumably friends visiting the city might get offended.

I also asked Zynga if they plan to remove farm and pet animals from their various games to please P.E.T.A, or offer non-genetically modified and pesticide-free crops for Organic-loving FarmVille players. Again, no word back from them.

I don’t know why this bothers me so much, since I’m not very religious myself. But it just seems so artificially politically correct. The company has come a long way since the rough and tumble Scamville days, it seems.