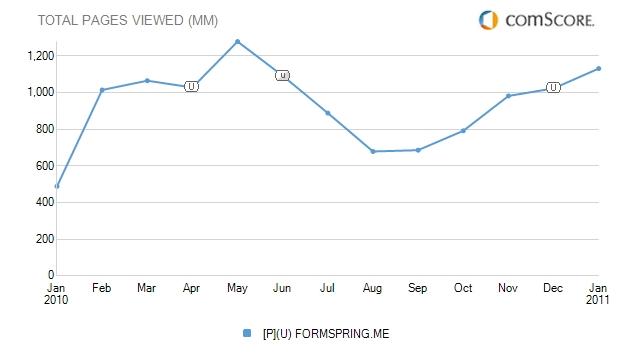 Over the past couple of years, we’ve seen a blooming of new Q&A sites which are both social and informative. While Quora gets a lot of our attention here at TechCrunch because of the quality of the answers it generates, it is still tiny compared Formspring, Stack Overflow, and most of its other competitors. Formspring, in particular, is killing it once again after a drop-off in activity in the middle of last year.

According to comScore, Formspring had an estimated 1.1 billion pageviews in January, up 65 percent from September, and almost back up to its peak of 1.3 billion last May. Formspring also attracted an estimated 19 million unique visitors worldwide in January, compared to 3.1 million for Stack Overflow and only 496,000 for Quora. (Albeit, Quora’s visitors grew nearly 90 percent from December to January alone, compared to 5 percent monthly growth for Formspring. However, Formspring is adding about one million new members a month).

Formspring is much lighter and less intimidating than Quora. It’s a social Q&A site where you can ask your friends anything and the answers get stored on Formspring. You can follow people on Formspring, or spread your questions out to Facebook or Twitter. The startup just raised $11.5 million last month.

One reason for Formspring’s growth since September is that it really appeals to college students. It’s biggest demographic, according to comScore, is 18-to-24-year-olds, followed by 12-to-17-year-olds. But it’s also been putting out new features that help questions go viral. These include “smiles” (Formspring’s version of a “like”) and a featured Question of the Day. Formspring is seeing between 3 million to 4 million smiles per week, and a Question of the Day can elicit as many as 500,000 responses. Sites can also embed Formspring questions across the Web with “Respond” buttons.