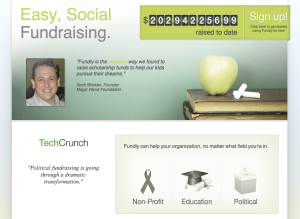 Today, social fundraising platform Fundly announced that it had closed a $2 million seed funding round led by a group of Silicon Valley investors. Using AngelList, a marketplace that makes it easy for startups to connect with angels, Fundly assembled a laundry list of reputable investors, including Mitch Kapor and Stephen DeBerry of Kapor Capital, Trevor Kienzle of Correlation Ventures, George Zachary of Charles River Ventures, and Jeff Fluhr of AngelHub.

Fundly, formerly known as BlueSwarm, adds to the $800,000 it raised back in July from a group of individual investors, including Harvard Business professor Clayton Christensen. You can read our coverage of the initiation of the first round (and watch TC’s interview with CEO Dave Boyce) here.

Founded in Boston in 2009, Fundly is a SaaS platform that aims to give your political campaign, your university’s alumni office, or your non-profit that extra boost by making your fundraising social. It does this by leveraging your social networks, like Facebook, Twitter, and LinkedIn — as well as peer-to-peer interaction — to encourage your donors to become social advocates. As part of this effort, Fundly offers a Facebook app that can be shared among your supporters, for example, allowing donors to compete with their friends to raise money for your cause, work to earn rewards, invite their friends, tell friends about support for cause, and give and receive virtual goods — all without leaving the comfortable confines of Facebook.

According to CEO Dave Boyce, when a friend asks another friend to help raise money for a particular cause, the added trust inherent in that social dimension results in a 10-times higher response rate and 52% higher donation than a cold call or email. Traditionally, fundraising has been the domain of professionals, who target and reach out to high net worth individuals to meet their goals.

The 2008 presidential election, in contrast, provided ample evidence of the huge fundraising opportunities that exist beyond the social elite, even if those donations happen to come in smaller numbers. During her run for governor last year, for example, Meg Whitman raised more than $20 million from thousands of Californians using Fundly’s platform. What’s more, the service was used in more than 50 percent of senatorial races during the past political season and has already been used to raise more than $200 million from hundreds of thousands of individual donors, according to Boyce.

Causes.com, founded by Sean Parker and Joe Green, is a well-established competitor with big-name recognition behind it, but Boyce said that the two sites differ in their target audience. Causes seems to be aimed more at individuals seeking to make a difference (their site says they’ve already attracted 140 million of these individuals) and create awareness around particular issues, whereas Fundly’s customer is the non-profit itself. You can think of Causes.com as Web 2.0 applied to advocacy, while Fundly is a SaaS platform — a product that offers its clients the tools they need to collect data and view detailed reports about their donors.

Since its launch, Fundly has moved beyond political campaigns and is now offering its service to all non-profits. Educational institutions have been among the most recent converts, including Boston College, University of Massachusetts Amherst, Communities In Schools, and the Silicon Valley Education Foundation.

Perhaps the biggest selling point for the social fundraising platform is that it doesn’t require you to install any software — nor does it require any costs upfront, you simply pay as you earn money. So, if you’re looking for an easy way to process payments and record pledges online in real-time, or send automated payment reminder and confirmation emails in a socially optimized setting, Fundly may just be what you need to launch your campaign for Town Crier.

More about Fundly in the video below: