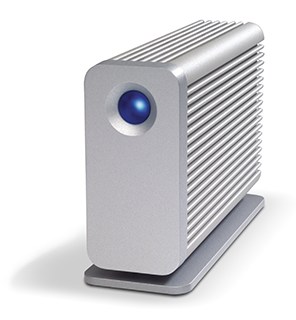 Following the Thunderbolt-centered Intel and Apple announcements, we fully expect that the accessory makers will be coming in droves to support the new protocol. LaCie was among the early adopters of USB 3.0 when that was new, and so it’s no surprise that they’re in the front line with supporting Thunderbolt. Their first entry is this Little Big Disk, featuring the new connector and SSDs on the inside.

It’s actually not a traditional HDD, since those would have trouble keeping up with the 10Gb/s (up to 700MB/s in LaCie’s tests) throughput provided by the interface. Instead, inside it are two 250GB Intel SSDs in RAID 0, with a combined bandwidth of… well, a lot.

The whole thing weighs about 1.5 pounds, and is encased in the ripply-aluminum material of which LaCie is so fond.

One handy feature that will likely be common to most TB devices: you can daisy chain drives, and even attach a monitor on the end. Handy! But not really the most likely setup.

Of course, having two discrete SSD units of such large capacity is going to make the Little Big Drive ridiculously expensive. A single 250GB Intel 510 drive will run you over $500, so this little LaCie guy is going to break the bank for sure. It should be available in the summer.