Often explained as “solid-state heat pumps,” thermoelectric technology (a.k.a. thermoelectrics) can capture wasted heat, and convert it into power. They can also displace heat and maintain a cool temperature in everything from laptops to refrigerators and lasers. The technology provides an environmental benefit versus compression-based refrigeration and other power generating technologies, because thermoelectric modules don’t use toxic coolants or burn fossil fuels, and generate no noise. They have no moving parts.

Thermoelectric technology has also been around for decades.

President and chief executive officer of Phononic Devices, Anthony Atti, said his company’s particular brand of thermoelectrics are distinct from incumbent varieties because:

“[Existing thermoelectric modules] have used bismuth telluride and bismuth selenide. Our proprietary materials are from a different class of elements [on the periodic table]. They are abundant domestically, low-cost and can be manufactured and integrated with existing operations across semi-conductor industries. Our thermoelectrics are also much more efficient than others.”

Phononic Devices previously attained a $3 million grant from the Advanced Research Projects Agency Energy program (ARPA-E) to improve the efficiency of thermoelectrics in cooling and converting waste heat to power.

According to an ARPA-E press statement on the company:

“In today’s energy landscape [Americans] generate most electricity by making heat, whether it’s through burning coal or splitting atoms. That heat makes steam which turns a turbine and makes electricity…Most of the heat is wasted, a staggering 50-60% according to Department of Energy estimates.

Phononic Devices [devices are projected to] dramatically improve thermoelectric efficiency from less than 10 percent today to more than 30 percent, resulting in a dollar-per-watt energy savings of 75 percent for power generation and 60 percent for cooling, respectively.” 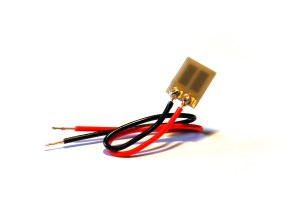 Dr. Atti said his startup aims to bring its thermoelectric modules (image, right: they’re about the size of a matchbox) to the market of electronics cooling, first — which encompasses consumer electronics, military equipment, and medical and laser instruments — and to refrigeration for residential use. Longer term, they should be applicable in air conditioners, he said.

A partner and clean tech investor with Venrock, Matt Trevithick said the company’s highly efficient thermoelectrics — spun out of the University of Oklahoma’s tech transfer program — had disruptive potential, reminiscent of LED lighting:

“Cooling compressors have been refined for a century. They work well enough, despite some known problems, and are cheap enough to be widely deployed. We think Phononic Devices finally has a solid state technology that has the performance metrics necessary to compete directly against compressors.

This is an outlier opportunity. Other technology exists, but does not have the efficiency to compete against vapor compression technology. The story I expect will unfold will be the one that’s now unfolding with solid state lighting, which is just now becoming good enough, performance-wise, and is priced appropriately enough to compete against incandescent lights.”

Dr. Atti said his company plans to grow from about ten full-time employees today to about seventy in three or four years. He would not name specific target customers, but said Phononic Devices will use its new-found capital to develop commercial manufacturing capabilities in the U.S. and build its market. The company is pre-revenue.

Corporations that use cooling technology in their high-tech products— like Siemens, GE, LG, Samsung, HP, JDS Uniphase or Honeywell — could all grace Phononics’ list of prospective customers. For a piece of that robust market, the company faces competition from peers in the field of thermoelectrics like Nextreme and MicroPelt, which have focused on harvesting heat in, and powering or cooling wearable, or low power consuming wireless devices.