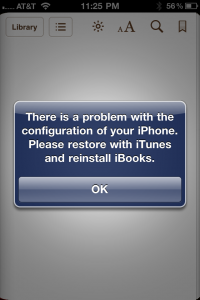 According to Twitter user Comex, iBooks will lock itself down after jailbreak using Greenpois0n, thereby forcing you to restore the phone and reinstall the app. How? By trying to run unsigned code and, if it succeeds, it will notify the authorities.

It seems that before opening a DRMed book, iBooks drops an improperly signed binary, tries to execute it, and if it works concludes that the device is jailbroken and refuses to open the book.

This apparently has been happening for a while now but only for certain apps and the protection is easily thwarted by a newer jailbreak that replaces the current Greenpois0n hack.