A new poll from Harris Interactive finds that a majority of Americans oppose government budget cuts impacting mass transportation (by 54 to 35 percent) and pollution controls (by 54 to 37 percent). If elected officials are taking those results seriously, they may need to revise some of the U.S. Environmental Protection Agency’s proposed 2012 budget to maintain constituents’ favor.

Feeling the pinch would be programs that: protect the Great Lakes; clean up hazardous waste sites; and help states provide clean and safe drinking water to their residents. 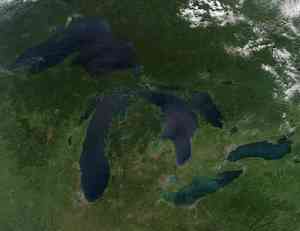 Specifically, the Superfund program to support cleanup at hazardous waste sites, would be slashed by $70 million to $1.2 billion for 2012; spending on projects “strategically chosen to target the most significant threats to people’s health in the Great Lakes ecosystem,” would lose $125 million year over year; and the hardest hit (by dollar amount) would be the Clean Water and Drinking Water State Revolving Funds (SRFs) program, which could lose $947 million from 2010 to 2012.

The president’s budget still faces Congressional approval — House Republicans have suggested a plan with twice the cuts for the EPA, especially related to air pollution programs.

“Rep. Mike Simpson (R-Idaho), chairman of the Interior-EPA spending panel, said his goal is to keep the EPA from implementing greenhouse gas regulations through the remainder of the fiscal year, so that House Energy and Commerce Chairman Fred Upton has time to pass a long-term bill to block the regulations.”

The president’s proposed budget actually increases spending on air pollution controls, though it takes away from water and hazardous waste sites. As Greenwire noted Monday “state and local air quality agencies would receive $79.5 million more than they are getting at the fiscal 2010 funding level.”

Some other programs that would survive and thrive, despite the suggested purse-tightening of the Obama administration, would benefit businesses and institutions with a heavy research and development focus, and enforcement officials.

According to the EPA website, the Science to Achieve Results (STAR) grants program, for example, would see a $24.7 million increase in spending to ensure that the EPA procures and/or uses “best-in-class science [and technology] to protect air, water and land.” There would also be an increase of $584 million in spending to support research and innovation into new and emerging environmental science.

Additional spending would go to enforcement, namely increased inspections and oversight of chemical and oil facilities to the tune of a $27.5 million increase for enforcement and compliance, using what the EPA called “e-reporting and monitoring tools.”

Majorities of Americans, according to the same Harris Poll referenced above, may not be happy about that, either. They favor cutting “spending by regulatory agencies (by 56 to 28 percent)… and subsidies to business (by 51 to 37 percent).”

Image: The Great Lakes on a clear day, via Nasa Goddard Photo & Video