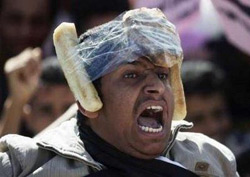 Here’s a wacky one for your Wednesday consumption. Researchers from the mighty University of Sydney’s Centre for the Mind may have cracked the theory behind the thinking cap. You know, “Let me put on my thinking cap, sit in my thinking chair.”

The idea is that by wearing a device that then passes low levels of electricity through your head, through your brain, you can increase “insight.” Scientists rounded up 60 “healthy right-handed participants” and found that 60 percent of them responded positively to transcranial direct current stimulation. (Twenty percent responded positively in the control, this experiment’s equivalent of a placebo. No idea what the remaining twenty percent of people were about.)

That’s a tortured way of saying that when exposed to the aforementioned low levels of electricity people were able to use their noggin more effectively, and, more importantly, in different ways. Let’s say your’e given a task and want to use Method A to solve it even if it turns out that Method A is rubbish. By wearing the cap, people were more disposed to trying out, saying, Method D. It helps you think differently. Don’t tell Apple.

In other words, a thinking cap. You get the idea.

Picture is kinda related, though I’m not entirely sure how effectively bread conducts electricity