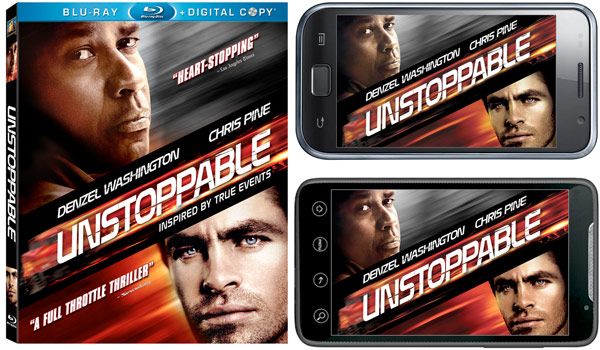 Android has been unstoppable this week — they’re railing the competition. That momentum isn’t expected to slow, especially since the Blu-ray release of Unstoppable comes with a digital version for Android . Who knows what took so long, but we’re glad it’s here.

The release marks an industry first where a digital version for Android in released with Blu-ray. Though, there are a few things not to our liking. First, you have to have a WiFi-connected Blu-ray player to send the video over to Android. Secondly, you have to watch it on the free app PocketBlu.

Industry First for Blu-ray from Twentieth Century Fox Home Entertainment as Blu-ray Digital Copy of UNSTOPPABLE available for AndroidWith tomorrow’s Blu-ray launch of UNSTOPPABLE, the action-thriller starring Denzel Washington and Chris Pine, Blu-ray Digital Copy will be available for the Android platform for the first time ever. This functionality is an added feature on the UNSTOPPABLE Digital Copy thru BD Live, marking the first time fans with an Android-enabled device will be able to transfer a sell-through movie to their handheld device.

UNSTOPPABLE is an electrifying action-thriller that follows Oscar-winner Denzel Washington* and Chris Pine (Star Trek) as they try to derail an unmanned, half-mile-long runaway freight train transporting deadly toxic material. Only two men can stop the train that is barreling towards Scranton, Pennsylvania: a veteran engineer (Washington) and a young conductor (Pine.) Thousands of lives hang in the balance as these ordinary heroes attempt to chase down one million tons of hurtling steel and prevent an epic disaster. Helmed by visionary director Tony Scott (Man On Fire), this story inspired by actual events delivers excitement and suspense that are…UNSTOPPABLE!

Android users will be able to unlock the feature presentation, as well as UNSTOPPABLE Blu-ray extras (Disc One):
• Derailed: Anatomy of a Scene
• Hanging Off the Train: Stunt Work
• On the Rails with the Director and Cast
• The Fastest Track: Unleashing Unstoppable
• Director Commentary Track
• Tracking the Story: Unstoppable Script Development

To access Blu-ray Digital Copy on Android, users must have the UNSTOPPABLE Blu-ray disc, a wi-fi connected Blu-ray player, Android 1.6 or higher, and the PocketBLU app, which can be downloaded free from the Android Market. UNSTOPPABLE Blu-ray and DVD will be available this Tues., Feb. 15.