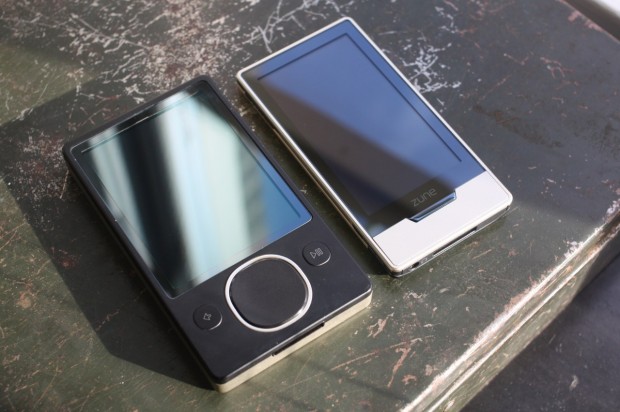 As Mary-Jo Foley points out, Microsoft suits are seemingly avoiding using the platform’s name lately. It’s a bit strange seeing how the Zune brand is fairly important to Windows Phone 7. The mobile phone platform uses the Zune name for all things media. But it’s still odd that not only are Microsoft executives not talking about the brand, but also the absence of talk was noticed. Chances are if anything is changing, the brand will survive. It’s the physical media players that might get the pink slip. And that sucks.

The Zune launched as the anti-iPod. It was brown instead of white. You rented music instead of buying it. It was Microsoft’s attempt to think different. It worked. The Zune was a winner even if the sales numbers don’t agree. The Zune products kept up with the iPods in storage and specs for some time. Even the Zune HD countered the iPod touch nicely until Apple ultimately trumped Microsoft with the App Store — and then FaceTime.

The Zune products still stands as one of the best portable media players on the market. The Zune HD is a rock-solid device sold at a fair price. But it’s likely on its way out. Microsoft is moving forward hard with Windows Phone 7.

Zune products never sold all that well anyway. Microsoft was always in contention for the number two spot in the PMP race. Apple of course held a massive chunk of the market, but SanDisk, Rio, Samsung, Philips, Archos, and eventually Sony were fighting for second place. The Zune is about the only memorable device to stand strong against the iPod horde. It’s still number 13 on Amazon’s Bestselling MP3 player’s list. Only cheap SanDisk players separate it from the iPods.

It’s hard to imagine the Steve Jobs & Co. didn’t follow the Zune closely. The Zune Marketplace subscription comes to mind as Apple roles out a more modern version. But the hardware, the interface, the whole platform was on par with Apple’s when it debuted. Apple likely saw that its touch products needed something different and more storage wasn’t the key. It was the App Store, which is about the only reason currently to buy an iPod touch of a Zune HD. Apps later debuted on the Zune HD but some two years later, there’s still only a tiny fraction available.

The Kin’s death shows that Microsoft isn’t letting sub-par platforms survive. It’s make it big or hit the road now, and well, the Zune MP3 player is probably on the way out.

The Zune name will live on. It’s part of the Xbox 360 ecosystem. Windows Phone 7 uses the brand for locally-stored media. The name is important to Microsoft. The MP3 player isn’t. It’s still possible that the long-rumored Zune HD2 will surface (maybe at SXSW) and lead a valiant charge towards the iPod touch. But the timing feels off. Even Apple has slowed the progress of its large format media players and now with Nokia in Microsoft’s camp, smartphones will likely suck up all the dev juice.

Microsoft already split up the Zune team back in 2009. The majority went into the Interactive Entertainment Business division that also oversees the Xbox. A smaller chunk went with the WinMo 6.5 people. Whatever the future holds for the Zune, hopefully these people were at least internally recognized for their product. The Zune, and later the Zune HD, are fantastic. Too bad the same can’t be said about Windows Phone 7 yet.