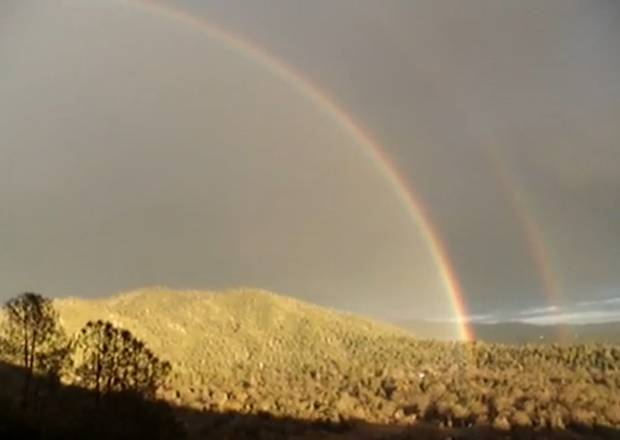 On Friday the WSJ published an article entitled “Apple’s Jobs Calls Shots From Home” which depicted the Apple CEO as still having a generous hand in the day to day going ons of the company despite being on medical leave. Jobs involvement comes as no surprise, as Jobs himself said in the statement announcing his absence, “I will continue as CEO and be involved in major strategic decisions for the company.”

Along with proof that Jobs has kept his word, the WSJ has somehow tapped into the motherlode of people familiar with Apple this week, publishing reports on multiple product developments, from the existence of a cheaper iPhone nano, to the possibility of MobileMe being available for free as well as the chance it might be turned into cloud-based storage for iTunes media. The WSJ also hints that Steve Jobs has returned to campus specifically to focus on these and other upcoming projects, including the new iPad.

As speculation as to what the reported Jobs appearances may mean nears fever pitch, we have confirmed that he indeed has been making the rounds, and that he isn’t on campus for any one reason according to a source. In any case, the sight of Jobs returning to work instills hope at both Cupertino and beyond. On Friday, the same day as the WSJ story, I received the following email from an Apple employee, with their take on what their former CEO’s reappearance may mean.

The email was so eloquent and timeless it bears republishing in full, below.

Double rainbows, and what they mean

“Here’s to the crazy ones. The misfits. The rebels. The troublemakers. The round pegs in the square holes. The ones who see things differently. They’re not fond of rules. And they have no respect for the status quo. You can quote them, disagree with them, glorify or vilify them. About the only thing you can’t do is ignore them. Because they change things.”

When Steve Jobs returned to Apple as Interim CEO, he worked with Chiat Day to create an ad campaign to answer: “Who is Apple, and what is it we stand for? Where do fit in this world?” The Think Different campaign featured Jobs’s personal heroes: Einstein, Gandhi, Picasso, and others. Yet looking at the campaign today, it feels like it applies as much to Steve Jobs himself as it does to the people he featured.

For that reason, when Steve Jobs sent an email on January 17 of this year to Apple employees announcing that he was taking an indefinite medical leave of absence, there was a sadness that, perhaps, the tech community had limited time to spend with someone who, like him or hate him, was “crazy enough to think he could change the world”.

While the financial markets didn’t reflect a sense of panic or sorrow (Apple’s stock price is higher today than when the news was announced on January 17) many people in Silicon Valley felt that the indefinite leave implied that Steve Jobs was moving out of day to day work and essentially retiring from Apple, never to return.

It was, therefore, a bit of a surprise when reports began surfacing that Steve Jobs was spotted back on Apple’s campus only 2 weeks after his announcement. The Wall Street Journal ran a story on February 11 that not only was Steve Jobs “taking business meetings at home and on the phone” he had also “been seen on Apple’s Cupertino campus”. Reports have surfaced on other websites that Steve Jobs has in fact been on campus frequently, meeting with executives and having his lunch meetings in the cafeteria with SVP of Industrial Design Jonathan Ive. For many who have seen Steve Jobs at Apple recently, this is a “double rainbow” moment: a mixture of awe, excitement, and confusion.

So what does it mean?

Financially, these reports will likely do little to move Apple’s stock price, just as the original announcement had a muted response. But this isn’t about stock price. It’s also not about computers, phones, operating systems, App stores, or televisions. It’s about community. And knowing that someone that has been a part of that community for decades is still there: browsing lunch options in the cafeteria, walking around with his coworkers and doing his best to contribute something meaningful.

“Your time is limited, so don’t waste it living someone else’s life. Don’t be trapped by dogma, which is living with the results of other people’s thinking. Don’t let the noise of others’ opinions drown out your own inner voice. And most important, have the courage to follow your heart and intuition. They somehow already know what you truly want to become. Everything else is secondary,” Steve Jobs said in his 2005 Stanford Commencement Address.

It feels appropriate to take a moment now to reflect on those words, our community, and our time here.

[A link to this video was included at the bottom of the note.]

The mobile market has had an unusually exciting past couple of weeks, with news of the Nokia and Microsoft partnership and HP launching a suite of devices based around its newly acquired webOs making headlines. But bold moves by competitors haven’t shaken the market’s faith in Apple, as our tipster and the WSJ point out, Apple stock has risen 2.4% to $356.85 a share since Jobs announced his leave and COO Tim Cook took over on January 17th.

As my colleague MG Siegler touched on, this market optimism is parallel to what happened during Jobs’ six month leave in 2009. After an initial hit, Apple’s stock price bounced back due to a series of product updates including iPhone OS 3, the iPhone 3GS and OS X Snow Leopard. If  we can glean anything from the stream of media reports in the past couple of days, history is at least trying to repeat itself.

Alluding to a popular Internet meme where a man expresses extreme amounts of emotion over the sighting of a double rainbow, our Apple tipster refers to a Jobs appearance as “double rainbow” moment: “a mixture of awe, excitement, and confusion.” And whether we’re reading about it in an article or seeing Jobs himself unexpectedly lunching in the cafeteria, we’re all still left asking “What does it mean?”

Watch our own version of an Apple “double rainbow” moment or read more about Apple’s 2011 product vision here. 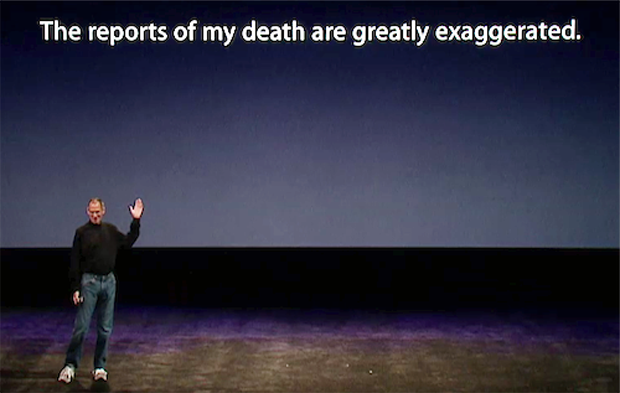