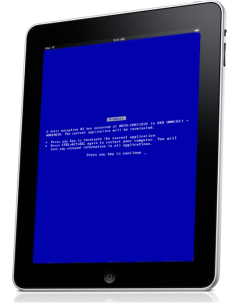 A new survey done by Accenture has revealed that people in the world today are “increasingly frustrated with devices that frequently crash or don’t work as well as expected.” Well blow me down!

It’s no surprise, of course, and the survey could probably have dug a little deeper, but it does reveal a few issues with the way gadgets are going these days. Smartphones and tablets are attempting to do way more than the average user needs them for. Unfortunately, you can’t just say “give me an iPhone, hold the Bluetooth.” The configuration thing is more for PCs, and people want their phone to just work. So it ends up being extra-frustrating when something they just want to do one or two things fails because it was trying to do ten.

This is why I still love my Zune HD. Everyone who uses it finds it pleasant and simple, and although it too tries to do too much (and fails), it’s never failed at its primary purpose: playing music.

Unfortunately, single-purpose devices means you own more things, maintain them, lose them, and so on. The instability and “kitchen sink mentality” is the other side of the convergence and convenience coin.