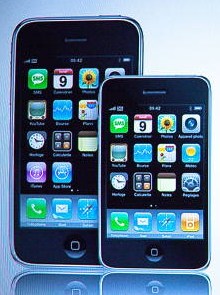 We’ve been hearing “iPhone Nano” rumors for a long time. In 2007, 2008, 2009, though strangely not 2010, we heard from suppliers, case makers, tipsters, sources, and so on that there’d be a new, smaller iPhone out there soon, but it has never materialized.

So what makes this newest rumor, reported by Bloomberg, any different? Nothing, really. We’re just passing on the word.

The idea is that it would be a cheaper, smaller version of the iPhone (it’s supposed to cost $200 unsubsidized) that would compete more directly with the mid-range Android handsets that are eating up the market. The source claims to have seen the device last year, but cautions that it may be delayed or canceled. Very convenient!

I don’t buy it, for the same reason I didn’t buy it during the last few years. Apple has committed to this size as the size, and the form factor is too iconic for them to change it. Furthermore, shrinking it would likely make it more expensive, not less expensive. And if it were cheaper, it would likely be less powerful, something Apple doesn’t want to do. It has never put out a new iPhone that was less powerful than the last. Everything about it has always been improved with every iteration.

And now after four years they’re going to say of the most recognizable gadget in the world “oh maybe people want a smaller one”? Apple knows their brand too well to dilute it with something like this.