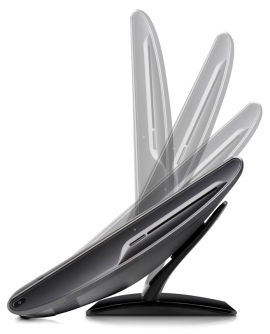 It’s nice to see HP be one of the first to launch a “reclining PC” that rotates up to 60 degrees from a standard 90 degree viewing angle.

I wrote about the need for this type of computer in 2009. The HP TouchSmart is a decent, if heavy-as-hell, touchscreen iMac clone. But reaching up to touch a desktop screen doesn’t really work ergonomically. Your hand is above your heart and it doesn’t feel comfortable for very long. You end up just using the physical keyboard and only touching the screen when friends are over to be impressed.

“The proper layout for a desktop touch screen machine is the architect’s desk,” I wrote then, in a moment of glaringly obvious insight.

And now HP has done it. But they’ve flubbed it, Like many of their attempts at cutting edge stuff.

First, it’s too clunky. And the screen is too small at 23 inches. And are those speakers at the bottom, where you’ll be resting your hands as you type on the virtual keyboard?

I mean sure, HP will move some of these units because HP can sell millions of just about anything into their channel. But OH MY GOD they had such a big opportunity here.

There are a handful of simple things that HP could have done to make this a game changer, the type of device that everyone would have wanted in their home.

First, it needs a much, much bigger screen. 23 inches is tiny today.

Second, HP needs to evolve the touch mechanics for this to work. They use (or use to use, I haven’t held this new device) infrared across the top of the screen horizontally and vertically to know where you’re touching it. It works and it’s cheap, but it’s heavy, causes a lip between the case and the screen that’s annoying and isn’t anything close to the capacitive touch experience of modern mobile phones. Capacitive touch won’t work on a screen that big today, but that doesn’t mean HP shouldn’t be coming up with something that does work.

Third, the design is awful. Speakers on the bottom aside, this needs to be something beautiful that sits on a desk and makes people want to work on it all day. HP should have partnered with a couple of furniture producers to offer actual desks, at low and high end price points, that this fits into. And/or re-imagined the whole desktop experience in a way that makes people go “WOW.”

What I see instead is something uninspired, produced at a price point where some people will say “why not?”

Come on, HP. I know your printers aren’t what they used to be, but you guys have it in you. Be inspired. Create something amazing. Because right now all you got is a computer where you can change the viewing angle.