The battle of the social media Super Bowl ads continues, with daily deals Groupon just posting on its own blog about how it rejected an ad concept where someone goes through a Groupon addiction, an idea conspicuously similar to what people are reporting competitor LivingSocial has up its sleeve for its 30 second ad before this Sunday’s Steelers vs. Packers game.

Internet Retailer describes LivingSocial’s ad, “The pre-game spot tells the story of how one man’s life changes as a result of his “deal addiction” with LivingSocial. The campaign was created by Martin Agency.” The details of what Groupon and ad partner Crispin Porter Bogusky have up their sleeve for Sunday are still unknown but we can be pretty sure as to what they’re not going to do (see what got left on the cutting room floor, above). Heh.

From the Groupon blog:

“Groupon’s Super Bowl ad is almost here – our very first offline campaign! We just wanted to take a moment to say thanks for all of the interest and buzz. We’re dying to show it to you and I don’t think you’ll be disappointed.

While we can’t share our TV spots yet, we thought you’d enjoy seeing an idea Deutsche Bank shared with us that didn’t make the cut. Meet the Groupon addict.”

Last time the two deals sites faced such a head to head comparison was when LivingSocial’s Amazon $10 gift card flash deal brought in over $13 million dollars, beating Groupon’s Gap record of $11 million. Sitting pretty with a $175 million dollar investment from Amazon, underdog Living Social used some of its cash to go in on a pre-game ad a few days after Groupon secured its spot.

LivingSocial has over 16 million subscribers while Groupon had over 44 million at last count. According to Experian’s rough data based on site visits in January, LivingSocial now has a 30% marketshare in the daily deals space, encroaching on Groupon’s 60% dominance aided by the success of its Amazon deal. 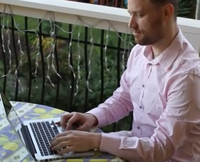