Most startups don’t hockey stick on traffic in the first few months after launch (it took Twitter well over a year, for example). So when they do, there’s either something very special going on, or something very sneaky.

FindTheBest, a comparison engine founded by DoubleClick cofounder Kevin O’Connor, is definitely surging. They launched late last year, took funding by Kleiner Perkins Caufield & Byers in December, and have been quietly growing like a weed. They have a million unique visitors a month now, the company says, and services like Compete show a definite, if early, hockey stick (disregard the actual numbers, Compete is always off, but the trajectory says something).

Has the company bought any traffic? Nope, says O’Connor. It’s all organic growth, with, as would be expected, lots of search engine referrals coming in. It’s not a huge amount of traffic yet, but it’s trending nicely and doesn’t seem to be spiking just based on press (there hasn’t really been any since December).

FindTheBest is a really good data search and comparison engine. If you want to compare things like ski resorts based on length of run, or prices, it’s for you. Or look at nutritional supplements based on actual government data on what’s useful and what’s not. Then click on “headache” on the left and see that Melatonin, Peppermint and Vitamin B2 might work. Sources for all the data, carefully vetted by FindTheBest staff, are linked at the bottom.

The company added a ton of new features today. Things like superlative comparisons to see the “biggest, cheapest, best, longest, fastest” of something. What ski resort has the longest run? This one.

What are the best Irish Whiskeys by experts? Here. And click the chart button (also a new feature) on the top right to see the data differently.

Check out top colleges. Then select Harvard and Stanford and click “compare” to see this. Then click the chart button on the top right to see visual comparisons of acceptance rates, SAT scores, tuition, etc.

They’ve made other changes as well, including a more streamlined user interface, the addition of user profiles and Facebook Connect.

What makes FindTheBest special is the quality of the data they’ve gathered from government and other trusted sources, the transparency into how the data is sources, and the tools to slice, dice and manipulate it.

Keep an eye on this one. It’s for real.

Update: And it’s also not a bad place to work, apparently. FindTheBest is located in Santa Barbara, California. I had trouble getting on the phone with O’Connor yesterday to talk about this story because the whole company was on the beach playing ultimate Frisbee. At least he has his priorities straight. That’s him in the red shorts in the photo below. 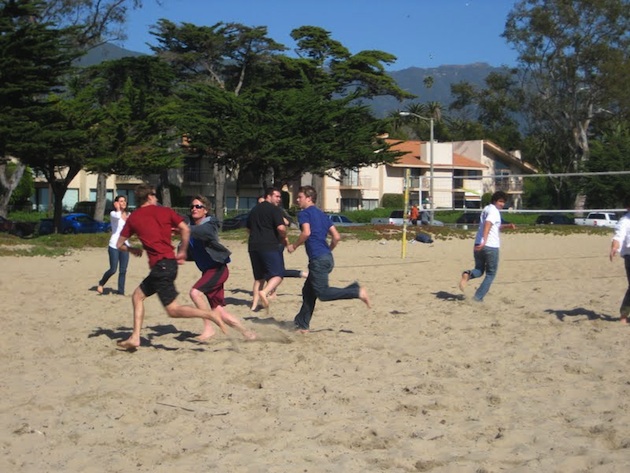