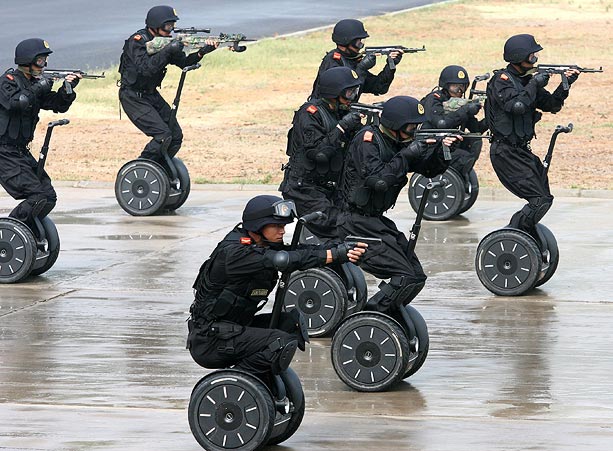 Are Segways dangerous? Personally, it all depends on the driver; whether or not they’re skilled, intoxicated or texting can have a lot to do with the safety of said transporter. But that no longer matters for riders in the UK because just a few days ago a UK judge ruled the Segway unsafe for sidewalks. So where is the Woz supposed to ride?

In court, the judge had to decide whether a Segway can be described as “a mechanically propelled vehicle intended or adapted for use on roads.” To that the judge concurs and it’s now law. No Segways on sidewalk, instead they can ride in the street. But, Segways are already banned in the streets because they aren’t up to safety regulations. So the only place to ride would be private ground (golf courses, shopping malls, etc.). It’s a bloody mess.

This whole thing got started when Segway rider, Phillip Coats, got ticketed for riding a Segway on a sidewalk. After the verdict was announced, he is considering an appeal. If successful, Segways could be brought back onto sidewalk and the roads, assuming some mechanical improvements.

So is the law just being an ass? Could this be because of no taxes taken in by UK government from the eco-friendly transporter? Either way, we hope that Coats appeals. That, or start walking.