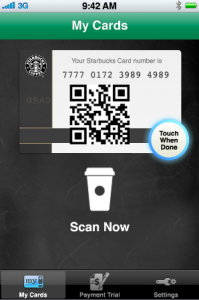 Back in 2009, Starbucks revealed the third step in their world domination process (after “Put a Starbucks on every other corner” and “Put a disguised Starbucks on remaining corners“): they would let people pay for their coffee with their phones.

It started off quietly enough, with a pilot program in but a handful of cities. Then it spread to the Target locations. Then to New York City. Today, it’s being expanded to over 7,000 new locations around the country.

As most phones don’t have the near-field communications point to make Jedi hand-wave style payments possible, they take a different route — but the concept is still pretty simple: First, you nab the Starbucks Card Mobile app for iOS or BlackBerry (platforms which, according to the company, roughly 71% of their patrons use). Then you buy a gift card, fill it up with some cash, and then plunk the gift card details into the app. Bam! Your phone now acts as the gift card, offering up a QR code on screen for the Barista to scan when its time to pay for your hit.

The program now includes around 7,800 locations — which, by our count, is most of the company-owned locations in the US. If you venture to any of the 9,000+ locations overseas, however, you’re gonna need some cash/euros/pesos.