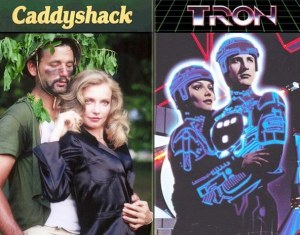 My special guest on this week’s Speaking Of is actress Cindy Morgan. Cindy is known in the film world for two iconic roles: as Lacey Underall in Caddyshack and as Lora/Yori in the original TRON.

I didn’t mention this in my original overview of TRON Legacy, because I didn’t want to spoil much of the movie for everyone, but I was very saddened by the fact that two of my favorite characters (Bit and Yori) from the original TRON didn’t make an appearance in the sequel, when so many other main actors did, including Bruce Boxleitner (shown holding Yori in the original TRON poster).

When I asked about this, Cindy admitted that she’d only seen the sequel two days prior to our interview, and that it was like going to the prom without a date. She made a small cameo in Sam Flynn’s room on his poster and that was about it. Cindy is incredibly gracious though, understanding that movie producers have to make difficult decisions. She hopes she’ll appear in the next sequel – and I’d love to see that happen too.

Prior to acting, Cindy was on a path to become a mechanical engineer when she ended up working in a newsroom, editing film reels and operating sound boards. She made the jump into Hollywood shortly after and had her face on a billboard in less than a year.

In the video below, Cindy shares her favorite gadgets and applications,  and talks about her latest project – a book called, “From Catholic School to Caddyshack” that’s set to be published this spring. The book will contain unseen behind the scenes footage and previously untold stories about the making of Caddyshack.

Cindy closes the interview with some very wise advice for TechCrunch readers; advice I think you will all enjoy. Finally she turns the interview around on me, to my surprise, asking me a few questions about being a woman involved in technology.

I don’t know about you, but I think Cindy needs her own consumer tech show. She’s amazing – I really hope you enjoy our interview as much as I did: