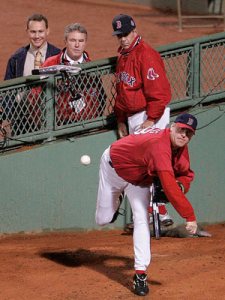 Earlier this week, we did a post on a new venture firm called Bullpen Capital, and if you checked out the CrunchBase profiles of the three founders you saw a pretty wide depth of experience.

Paul Martino has started four companies, most recently Aggregate Knowledge, and he was one of the first investors in Zynga. Duncan Davidson was most recently managing partner for the Leviathan-like VantagePoint Venture Partners, and founded several companies including Covad Communications– a DSL pioneer that went public and was valued as high as $9 billion. And Richard Melmon’s roots go back to the early Intuit days, through the legendary Regis McKenna, onto VisiCalc and eventually co-founding Electronic Arts. In a relatively young industry, those are some deep venture roots.

Apparently, their conference room table has seen about as much action. In a fun final segment we reminisce with the Bullpen guys. Enjoy!