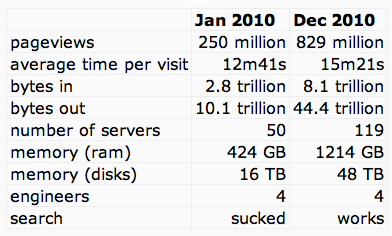 Social news site Reddit has just posted some interesting statistics on a remarkable 2010 filled with traffic spikes and user engagement growth. Most notable? The jump in pageviews from 250 million in January of 2010 to 829 million in December of 2010, a 232% growth.

Reddit has increasingly become a favorite haunt of many in the social media community, especially since competitor Digg’s v4 redesign underwhelmed both its casual and core users leading to an exodus in September. Digg which was worth $170 million earlier in the year, is now valued at just $102 million. The site still has more monthly unique visits than Reddit, according to Comscore.

Says power Digger and active Reddit user Victor Barrera, “I think Reddit’s growth can be atrributed to a couple main factors: Digg’s decline and a multitude of improvements and upgrades that really played into the scalability of their platform.”

It’s no surprise that Reddit’s emphasis on a steadily increasing its userbase is now reflected in increased traffic and site time per visit (by 2 minutes and 40 seconds). But can the company sustain these monumental numbers in 2011, with no major competitor downfall in site?

Barrera thinks so, “I think at the moment that the damage to Digg and the ensuing benefits for Reddit are pretty much near the end of that road. Reddit, in a way, is kind of in the driver’s seat. Uptime, scalability, and improving their platform from a technology perspective are what they’re trying to focus on the most. It’s a very “if you build it they will come” kind of thing.”