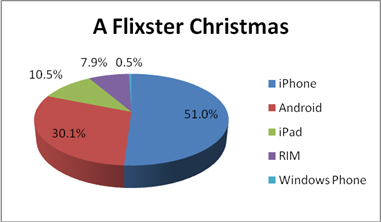 There has already been plenty of data out there suggesting that Apple had a monster holiday season. We’ll know for sure in a few weeks when they announced their earnings. For now though, we have to go by what third-party developers are seeing when it comes to app download numbers. And one company, Flixster, has given us some key details of how their mobile installs broke down from Christmas to New Year’s.

In other words, if you add the two iOS devices together, Apple gorged with 61.5 percent of Flixster’s downloads. Android, meanwhile got pleasantly plump with their 30.1 percent. RIM got the leftovers. And Windows Phone went hungry. The latter’s 0.5 percent equals just over 5,000 installs for the holidays. To put it another way, Windows Phone total installs over the entire span were the same as what Apple was seeing every 90 minutes. And even RIM was seeing 10,000 installs per day.

Obviously, it’s not entirely fair to compare all the platforms considering that Windows Phone is a new platform while others like iOS has been around for a few years now. Still, 5,000 installs over the holidays when rivals are seeing 100x of that is obviously not good.

Flixster also notes that their iPad app hit one million total users yesterday. It’s the ninth Flixster platform to reach that milestone, co-founder Joe Greenstein says. The others are Flixster.com, RottenTomatoes.com, and their apps for Facebook, MySpace, iGoogle, iPhone, Android, and BlackBerry.

“We averaged more than 10,000 installs per day on four different mobile platforms this Christmas.  And looking at the devices we expect to do well in 2011, that number could easily be 7 or even 8 next year,” Greenstein says.