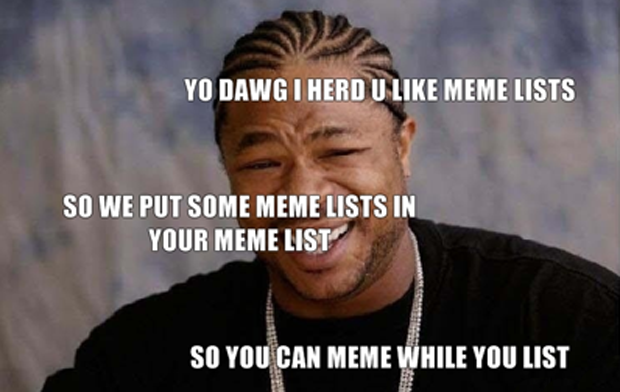 In this decade the Internet replaced television as our primary mode of disseminating culture. Many people are more familiar with Antoine Dodson’s “Hide your kids/Hide your wife” than any catchphrase currently on television. Remember the days of being able to say stuff you heard on TV like “No soup for you” or “Don’t have a cow, man” and have other people actually get what you mean?

There’s only so many times you can write posts around the theme “Hey, the Internet is now important” without inciting commenter revolt or a punch in the face. But the sheer number of meme round-ups found online today is testament to the fact that the web has won. So instead of making a list of my favorites, I’ll post some of the best lists of memes out there. Because I can and because it’s the only way to win. And because, like any connoisseur of memes knows, you can’t have viral culture without recursion.

Alexis Madrigal’s list made the cut for brevity and for lack of helpful context. Also because the focus on the catchphrases, which made people want to share these things in the first place, was pretty spot on.

The keepers of the most comprehensive database of Internet memes in existence, the folks at Know Your Meme have boiled the entire year in Internet culture down to about 90 seconds. They also seem to really have enjoyed “Deal With It.”

Urlesque actually gives out awards for this, called the Urlies but I was more impressed by their list of memes that had gone mainstream (Bed Intruder, Bros Icing Bros, Old Spice Guy). And namely for this little piece of wisdom, “News outlets have seemingly had fewer things to report on, so they’ve started playing “viral videos” to fill the fluff stories niche at the end of their broadcasts.” Ha.

Props for introducing me to CAPTCHA Art and for being as humble and homegrown a memes list as possible. Double plus one for not including any videos. Enjoy the traffic Jay!

Sure we’ve poked fun at them in the past, but if a meme happens on the Internet, and it doesn’t hit Buzzfeed, does it make a sound? From “24 Best Chatroulette Screenshots” to “Hitler Without A Moustache” here’s everything you clicked on this year while bored at work, in semi-infographic form.

The Huffington Post’s “The Best Internet Memes Of The Decade: Chuck Norris, Rickroll, Lolcats And More From 2001-2010”

Bonus points to HuffPo for slideshow format and spanning an entire decade. Minus points for quoting the New York Times’ definition of a meme in the first graph.

Bonus points for quoting The Urban Dictionary’s awesome definition of a meme “The thing that’s on your mind when nothing else is and your fingers are on a keyboard” in the intro graph. Minus points for the phrase, “Rosetta Blog.”

“Of course we’ve all heard of Paul Vasquez and Antoine Dodson by now, ’tis the wonder of the interwebs.” Thank you Chicago Sun Times. This is what I’m going to send my parents if I ever need to explain to them what a meme is or what WTF means for that matter.

An addendum to the Houston Press’ “Year In Video Memes: What Do They Mean?” this caught my eye because of all the references to being drunk on Four Loko (in and of itself a meme) while writing it. You get an A for effort Houston Press. A for effort.

That’s right count ’em 25 in the most thorough list I’ve read so far. Did anyone else find the time to list 25? Nope. Enough said. Also, I’m really impressed that this guy has written more text explaining these memes than I’ve written in my entire blogging career.

While not technically a list of memes, this is on here simply because “End of the Year” lists are in and of themselves a meme. How you like them apples?

While I’m sure whatever iterative cultural phenomena we experience in 2011 will go above and beyond what we’re seeing here,  you’ve got to admit that from “Star Wars Kid” to “Baby Monkey (Going Backwards On A Pig)” this was the decade where Internet memes came into their own. And just like I look forward to the day where it’s no longer “new media” and just media, I also look forward to the day where they are no longer “memes” and just culture.

Happy New Year (or whatever)! Ouch, my head hurts.