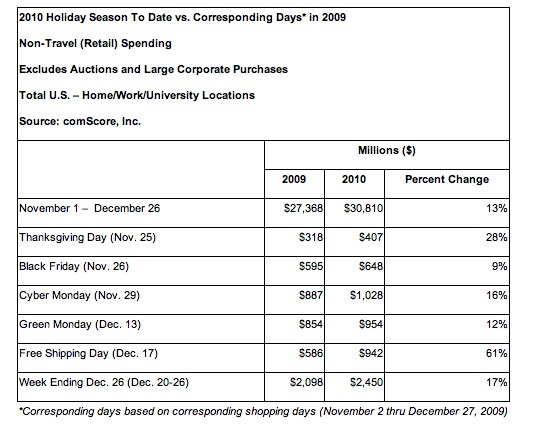 Online holiday spending continues to set records. comScore is reporting that retail e-commerce spending in the U.S. for the first 56 days of the November to December 2010 holiday season has reached a record $30.81 billion, which is an 13 percent increase versus the same period last year. The past week before Christmas saw $2.45 billion in spending, an increase of 17 percent versus the corresponding week last year. As expected, comScore reports that the massive snow storm that hit the Northeast region of the U.S. over the weekend helped push post-Christmas spending to record levels.

The company also reports that in terms of specific products, Computer Hardware ranked as the top growing category for the holiday season with a 23 percent increase versus last year. Interestingly, handheld devices (such as iPads and e-readers) and laptop computers have driven much of the growth in this sector.

Record e-commerce spending this holiday season has been written in the cards for some time now. Over the past few weeks, online retailers have seen fairly strong results, with total sales up 12 percent to over $28 billion so far.

And there’s still more spending to do, as many retailers are advertising New Years sales as well. Total sales for the full holiday season (through New Years) are expected to reach $32.4 billion this year, up 11 percent. I wouldn’t be surprised if consumers surpass this number. 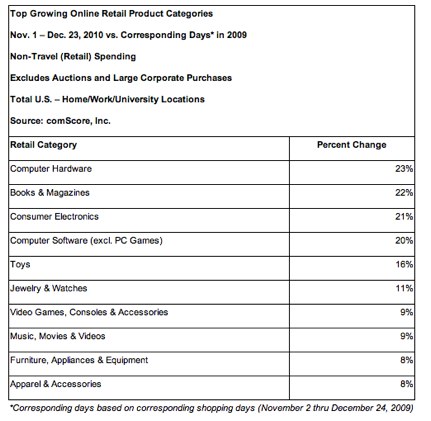