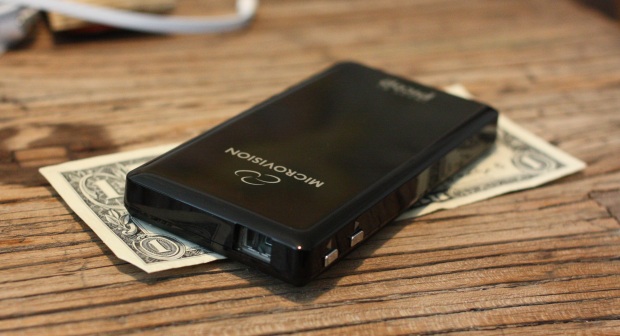 Short version: It’s hard to beat the ShowWX on portability and convenience, but on brightness and image quality it falls short of the competition.

The pico projector field is getting pretty packed, and although it’s still an expensive one to buy into, the proliferation of new technologies like the PicoP driver should help competition and push prices down. It functions on a different principle from normal projectors, using a laser light source being bounced off a resonating mirror. Because there’s no lens, there’s no risk of distortion and no need to focus. Unfortunately, it also prevents the projector from being particularly bright.

As you can see from the picture, it’s quite a small device. It’s about the size and weight of a largish smartphone — smaller even than the Optoma PK201 I recently reviewed. It’ll easily fit into a pocket and takes up almost no room in a bag.

The smallness seems to go along with a lack of features, though. Unlike the 3M and Optoma projectors on the market, there’s no room for a MicroSD card or any internal storage. I mean, it’s certainly reasonable to keep things simple, and of course if you’re using it as a projector for your iPhone, that’s where the media is going to be. But the portability really makes you want to have it to show off this or that photo or presentation, and that isn’t an option without an input. It’s really not that big of a deal to keep this stuff on your phone or computer, but it would be nice to be able to have some rudimentary file support.

There’s also no speaker, which I think is both good and bad. I mean, the speakers on every pico projector I’ve used so far have been just awful. But if you’re playing a YouTube video or NES game on your wall, you don’t really care. Luckily, the ShowWX+ has a 3.5mm-out, and again, since you’re going to be using a phone or laptop as the playback device anyway, it’s likely you already have a sound device. So really, it’s streamlining.

Operation is simple. You turn it on, it gives you a splash screen after a few seconds, where you can make any adjustments to gamma or alignment you need to make. The image is projected at an upward angle, so it can sit flat on a table and you’ll still get a whole image, unlike the 3M MPro series, which has a short throw that goes out equally far up and down from the lens — necessitating a tripod. So no tripod necessary with the ShowWX+, again making it the more convenient option. The operational principle of the display means that no focus is necessary, although if the image seems fuzzy you may need to do a slight adjustment via the menus. 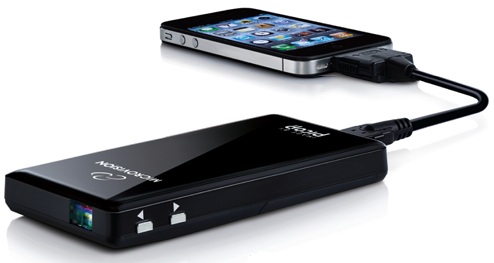 It comes with a connection cable for iPad, iPhone, and iPod. It worked like a charm after I connected it, though there’s no indication on the image that it’s changed sources; you have to watch for your iOS device to say it’ll play through “the TV.” You can buy a separate cable for VGA connections. The default connection is composite, which produces about as middling of an image as you’d expect. Its resolution is 848×480, which is perfectly fine for most TV shows and movies.

The trouble for me with the ShowWX is really in the image itself. Right off the bat it’s clear that it’s not particularly bright, but all of these projectors are under 50 lumens right now, which is peanuts compared with the cheapest traditional projectors. So going pico projector, you’re already prepared for a dim image, or rather one that requires a dark room. So The ShowWX+ has about 15 lumens, which isn’t much but can make a decent large-TV-sized image in a dark room.

There’s something about the image, though, that bugs me. It has a transparent, shimmery quality to it that other projectors don’t, even at the same lumen level. It must be the way the image is produced. I may just be overly sensitive to this, but it feels like the image is less substantial, and you can see through it to the backdrop more easily. I can’t quite put my finger on it, but I know it’s there, and it’d distracting. I mean, it’s sharp, and the colors are nice, but the whole thing has this indefinable quality of… barely being there.

If you already rely on your iPhone or iPad as a presentation or media device, the shortcomings of the ShowWX+ probably won’t bother you. If you’re looking for a more comprehensive projection package, check out the competition. I’m extra sensitive to image quality issues, so you may want to take my objection on that count with a grain of salt, but I definitely felt I got a better image with the 3M and Optoma devices, though they are of course significantly larger.